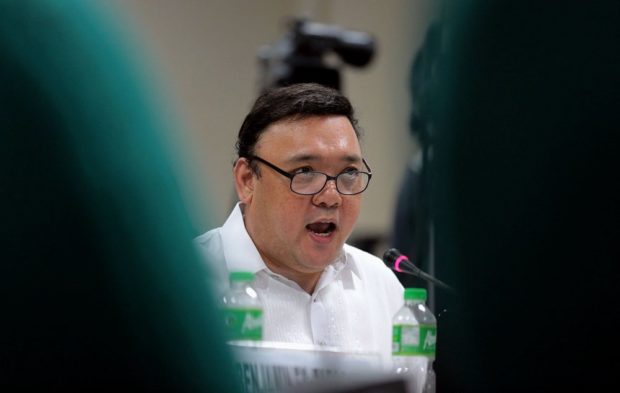 Kabayan Rep. Harry Roque has agreed to become President Rodrigo Duterte’s spokesperson with this goal in mind: “to reduce, if not totally eradicate, the impact of statements which appear to support genocide or violations of fundamental human rights.”

In a Saturday statement, Roque said he intended to “refocus the attention of the people more towards the fundamental position of the State, and less towards the manner by which such has been declared.”

Roque, a human rights lawyer prior to being elected as a party-list representative, would be tasked with speaking on behalf of a president infamous for his incendiary, antagonistic and often profanity-laced way of talking in public and cheering on the killing of drug suspects.

Despite appeals by some human rights advocates for him to reconsider Duterte’s offer, Roque said it was the President’s utterances on human rights issues that were “precisely what drew me towards the position of spokesperson.”

Roque, currently the Deputy Minority Leader of the House of Representatives, said the position would provide him a direct avenue to the President, adding that he even offered to serve as an adviser on the matter.

He noted that politicians outside Duterte’s circle who “relentlessly criticize the administration are simply ignored and labeled as ‘destabilizers’.”

“I considered the position with the specific purpose of getting an audience with the President to address key human rights issues in the Philippines. As a member of Congress, my voice is limited,” Roque said.

“By taking this position, I hope to be able to advise the President directly regarding the manner and methods he has used to tackle the problem of drugs,” he added.

Roque maintained that his position on human rights did not change and he still continued to be “a firm advocate for the protection and preservation of fundamental human rights of all persons.”

“By accepting this position, I am not condoning the violence surrounding the government’s anti-drug campaign, nor do I intend to further the same,” he said.

“Regardless of whether I am a member of Congress or of the President’s Cabinet, I continue to value the right to life and dignity of every person and do not support the arbitrary killing of any person by the State,” he added.

Roque’s statement was silent on who he would wish to take over his soon-to-be-vacated seat, amid infighting between him and Kabayan party-list’s other representative, Rep. Ron Salo.

But, in a text message to the Inquirer, Salo said the party-list group would follow the succession process provided under the law and honor the list of nominees submitted to the Commission on Elections.

This meant that third nominee, Ciriaco Calalang, would assume one of the two seats the party-list group won in the 2016 elections in lieu of Roque.

The Supreme Court punished Calalang in a 2013 disciplinary ruling that permanently revoked his notarial commission for serving ghost clients.

Although he had been feuded with Roque since December last year, Salo now said: “We’re very happy for this exciting development in our erstwhile member’s public service career. It will be a good venue to articulate the thoughts and leadership direction of the President.”

Salo still has a pending ethics complaint seeking Roque’s expulsion from the House in August, because the latter allegedly besmirched his reputation in a Dec. 12 privilege speech.

He also asked the SC to disbar Roque in January, prompting the latter to counter-attack with a motion to cite the former in contempt for publicizing the filing of the complaint.

Asked about the pending incidents against Roque, Salo said the party-list group’s board of trustees “shall discuss these” with its lawyers when he returns to the country on the first week of November.

The rift arose from Roque’s purported expulsion from the party-list group in January, after an internal investigation was conducted on his sexually-charged line of questioning on the love life of Sen. Leila de Lima during the House’s inquiry on her alleged involvement in the drug trade at the New Bilibid Prisons.

In response, Roque said the proceedings were held by an unrecognized board spearheaded by Salo, who he claimed was “obviously in panic mode” as possible criminal liabilities began to creep in over his role in the controversial P3.8-billion license plate deal under the Aquino administration. These remarks prompted Salo to seek his expulsion.

Roque will also leave behind in the House the bitter dispute between the duly-recognized minority bloc he leads and the Magnificent Seven bloc which unsuccessfully sought this role.

His appointment as presidential spokesperson “releases him from the challenge of masquerading as a minority leader,” Ifugao Rep. Teddy Baguilat Jr. said.

“As a self-proclaimed human rights advocate, I wish him luck in defending the horrendous human rights record of this administration,” Baguilat told reporters in a chat message.

Meanwhile, Albay Rep. Edcel Lagman said in a statement that “the charade is now over” as Roque would be “liberated and obligated to be the President’s official apologist.”

Lagman said Roque “minimized the grave impact of the unabated extrajudicial killings” hounding Duterte’s antidrug campaign, and chided him for concurring in the extension of martial law in Mindanao, seeking the investigation of the Ombudsman and calling for the defunding of the Commission on Human Rights.