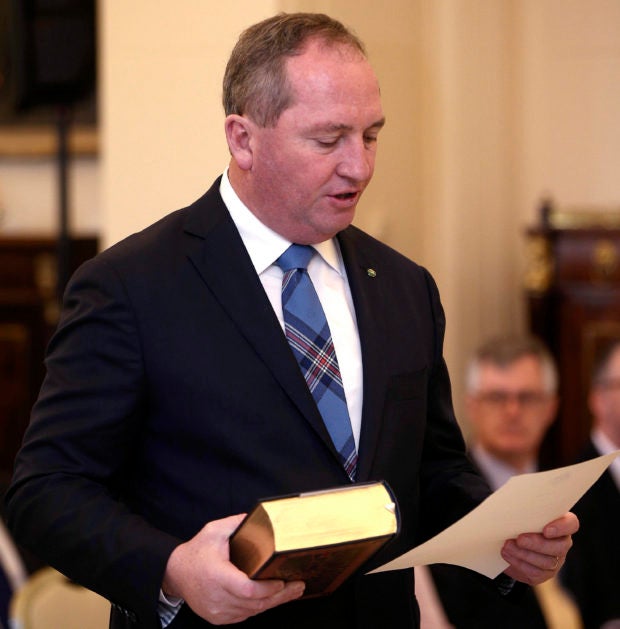 In this July 19, 2016, file photo, Australia’s Deputy Prime Minister Barnaby Joyce takes the oath of office as he is sworn in at Government House in Canberra, Australia. Australia’s High Court disqualified the deputy prime minister and four senators Friday, Oct. 27, 2017 from sitting in Parliament in a ruling that could cost the government its slender majority in Parliament. AP File Photo/Rob Griffith

CANBERRA, Australia—Australia’s High Court on Friday disqualified the deputy prime minister and four senators from sitting in Parliament in a ruling that could cost the government its slender majority in Parliament.

The decision to disqualify Deputy Prime Minister Barnaby Joyce over a 116-year-old constitutional ban on dual citizens sitting in Parliament means a by-election will be held for his rural electoral district in December.

Prime Minister Malcolm Turnbull’s conservative coalition has a single-seat majority in the 150-seat House of Representatives where parties form governments.

Joyce will be able to stand for re-election, having renounced the New Zealand citizenship he unknowingly inherited from his father. With the government trailing the opposition Labor Party in opinion polls, voters could use the by-election to toss both Joyce and his government out of office.

Joyce later apologized to his electoral division for the inconvenience of a by-election that will be held at the earliest possible date, Dec. 2.

“I was always apprehensive, some people say I’m a natural pessimist, I’m naturally cautious and I was always prepared for this outcome,” Joyce told reporters.

“I’m going to make sure that I don’t cry in my beer, I’m going to get back to work and work hard for the people of my electorate,” he added.

The court also disqualified four of the six senators whose qualifications to be elected were debated in a three-day hearing earlier this month.

Another government minister Matt Canavan, who the court heard might have inherited Italian citizenship from his Australian-born mother through his Italian grandparents, was allowed to stay in Parliament.

Nick Xenophon was also allowed to stay in Parliament. He was born to Cypriot- and Greek-born parents and checked with both embassies to ensure he wasn’t a citizen of those countries. He later found he was British because his father left Cyprus while it was a British colony.

Disqualified senators are replaced by members of their own parties without an election so the balance of power is not altered.

The seven lawmakers said they did not know they were dual nationals when they ran for election last year.

Richard Di Natale, leader of the minor Greens party, praised the honesty and integrity of his former deputies Scott Ludlam and Larissa Waters, who resigned in July after discovering they were New Zealand and Canadian citizens respectively. None of the other five resigned.

“If people are going to have faith in our democracy, then politicians need to start acting with some integrity with some decency and take responsibility for their actions,” Di Natale told reporters.

“It’s about time that politicians started acting in the national interest rather than their own self interest,” he added.

The constitution bans dual nationals from Parliament, a prohibition that critics have condemned as outdated in a country where almost half the people are immigrants or have an overseas-born parent.

The seven judges delivered their decision a day after Parliament was adjourned for a month. Had it come 24 hours earlier, Joyce would have suffered the embarrassment of having to immediately leave the House of Representatives where only lawmakers are allowed.

The lawmakers were exposed as dual citizens as media scrutiny escalated after Scott Ludlam declared in July that he was a New Zealander and had been illegally elected three times over a decade.

Previously only two lawmakers had ever been caught out by the foreign citizen ban, although other dual citizens have almost certainly served in the Parliament undetected.

The government had argued that only Ludlam and Malcolm Roberts, a senator in the minor One Nation party, should be expelled because they had failed to take reasonable steps to ensure that they only held Australian citizenship.

Solicitor-General Stephen Donaghue had told the High Court judges that the other five should not be disqualified from Parliament for breaching the constitution because they did not voluntarily acquire or retain citizenship of another country.

A clause in the constitution says “a subject or citizen of a foreign power” is not eligible to be elected to Parliament.

Donaghue, however, argued that the clause “cannot be read literally.”

“If a person is not aware either that they are a dual citizen or of a significant prospect that they are, in our submission by definition that person cannot have a split allegiance,” he told the court.

Bret Walker, a lawyer for Joyce and Nash, told the court that neither knew until recently that they were dual citizens of New Zealand and Britain, respectively.

As soon as they found out, they took all reasonable steps required to sever their foreign ties, Walker said.

“There’s no split allegiance where you’re not aware of one,” Walker told the court. “You cannot heed a call you cannot hear.” /jpv