US pedophile planned to reenact ’50 Shades of Grey’ — police

Superintendent Maria Shiela Portento, of the PNP Women and Children Protection Center, presents to media sex toys and other sexual paraphernalia reportedly seized from American Robin Hoyt Alderman, 58, who was arrested at the Naia on Monday, Oct. 23, 2017. Alderman is being accused of planning to exploit Filipino minors for sex and pornography. RYAN LEAGOGO/INQUIRER.NET

Portento,  of the PNP Women and Children Protection Center, was referring to an erotically explicit movie based on a best-selling novel about a rich young businessman and a woman in her senior year in college.

Last week, the PNP, in coordination with United States Department of Homeland Security, arrested 58-year-old Robin Hoyt Alderman upon his arrival at Terminal 2 of the Ninoy Aquino International Airport.

Alderman, who had just come from Ho Chi Minh City in Vietnam, was suspected of online sexual exploitation.

“On the basis of his ongoing communications with the victim that constituted procuring hiring and obtaining minor for the purpose of pornography and sexual exploitation, all of these are violations of the expanded Anti-Human trafficking law of the Philippines,” Portento said. 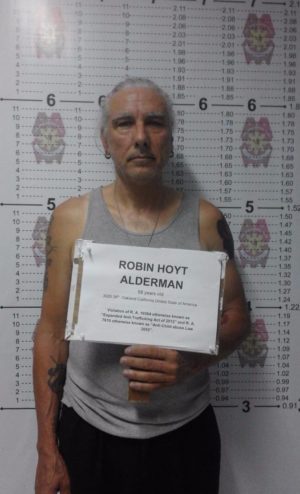 The 15-year-old victim was turned over to the Manila Social Welfare and Development, and a follow-up rescue operation was conducted which resulted in the rescue of two more girls ages 14 and 15 years old, the PNP said.

Alderman is facing charges before the Department of Justice, the authorities added.

Tuliao also bared that Alderman was planning to rent an old apartment, an old dilapidated van to abduct other victims and buy motorcycles to assist the said abduction of young, poor and even homeless Filipino girls for sexual exploitation.

“Bukod dito gumagawa rin sya video at binebenta nya (Aside from that, he was also making video and selling them),” he said, adding that the American would be tried for his offense and would be turned over to US authorities after he get to serve his sentence in the country.

According to Tuliao, this was not the first time Alderman entered the country. The police said it was his second or third time in the Philippines and he had also been to Vietnam and Taiwan several times.

Read Next
Mattis says US ‘not rushing to war’ with N. Korea
EDITORS' PICK
Speed up your game with the new vivo Y20s [G]
Pre-order the new vivo Y20s [G] to get a free TWS earphone
PH biotech firm, pharma group eye clinical trials for ivermectin use against COVID-19
Pru Life UK receives four golden arrows for solid corporate governance
WHO says not to use ivermectin on COVID-19 patients
NCMH adds 900 beds for mild COVID-19 patients
MOST READ
Stop ‘creeping occupation’ of ‘militia’ boats in WPS, Pacquiao asks China
Bea Alonzo clarifies status of her relationship with Dominic Roque
Convicted former aide of Sen. Bong Revilla dies — BuCor
Locsin to China: ‘Then move out’
Don't miss out on the latest news and information.