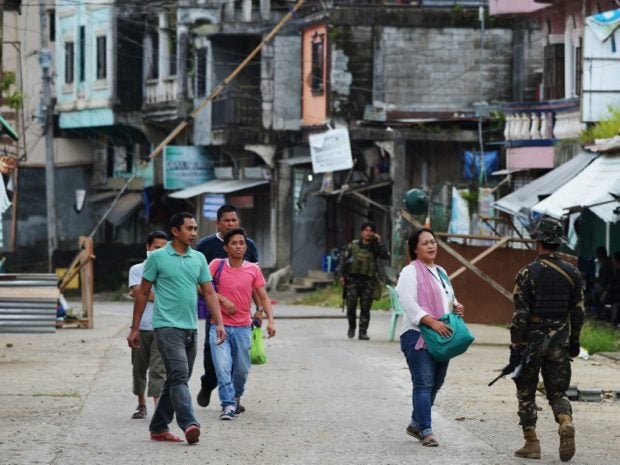 HOMECOMING A soldier talks to a group of residents returning to Marawi City after the military declared the end of the five-month battle against terrorists. —AFP

The military announced on Monday that the fighting, which claimed more than 1,100 lives and left the eastern half of Marawi in ruins, had ended following a final clash in a two-story commercial building in which dozens of gunmen were killed.

The militants had occupied Marawi on May 23 in what President Duterte and security analysts said was a bid to establish a Southeast Asian base for IS.

Washington’s top diplomat in the Philippines said the United States provided surveillance aircraft and other equipment to help monitor and assess the militants’ positions during the campaign.

The assistance was critical to the successful outcome of the fighting, Ambassador Sung Y. Kim told a small group of American reporters on the sidelines of an annual meeting of Southeast Asian defense chiefs with their Asian and Western counterparts at Clark Freeport in Pampanga province.

The campaign to oust the militants turned into the Philippines’ longest urban war, forcing about 400,000 people to flee their homes as the pro-IS fighters defied almost daily bombing raids by hiding in basements, tunnels and mosques.

“We are afraid but we want to check on our houses,” Jamaliah Lomontong, a village official in her 40s, told the French news agency Agence France-Presse (AFP) as she and some relatives walked into their neighborhood near where the main fighting occurred.

Lomontong said her house had survived, although it had been looted.

“Anything easy to take away was gone—television sets, laptops,” she said.

Only a few dozen civilians could be seen on Tuesday morning on the outskirts of the mostly destroyed eastern half of Marawi, where regular bursts of gunfire and occasional explosions could still be heard.

However, the sounds of war did not mean there was renewed fighting, according to Col. Romeo Brawner Jr., deputy commander of the military’s Joint Task Group Ranao.

He told AFP they were due to soldiers going through buildings looking for militants who may still be hiding, while troops were also detonating bombs that the gunmen had planted.

“It’s possible that there were some [militants] left behind. In every war, that is the SOP (standard operating procedure),” Brawner told AFP.

“So the firing is part of the mopping operations, because if there are holes, tunnels (in buildings), then the troops fire first into the hole before they check with their flashlights,” he said.

In the western half of the city, which largely escaped the fighting, hundreds of residents had begun returning.

“I feel a mixture of joy and sadness,” businessman Gonaranko Mapandi Jr, 46, told AFP as he stood close to a military checkpoint. “I’m happy because we are able to return. But I’m very sad at what happened to my city.” —With reports from AFP and AP