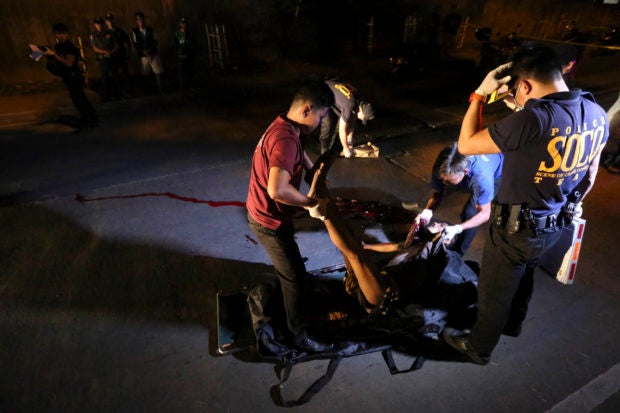 BUY-BUST Funeral parlor employees carry the body of Jay-R Gabuya, who was killed by police in a reported shootout last year during a drug buy-bust operation. —RAFFY LERMA

A survey showing growing public distrust of the police claim that slain drug suspects had resisted arrest could have been affected by the National Day of Protest held around the time the survey was conducted, Malacañang said on Tuesday.

Opposition lawmakers, however, said the survey results meant that the Philippine National Police could not always fool the public in citing the “nanlaban” (resisting arrest) argument as a reason for authorities to kill drug suspects.

The survey, conducted by Social Weather Stations (SWS) on Sept. 23-27, found that fewer Filipinos believed police claims that those killed in the Duterte administration’s antidrug campaign had resisted arrest.

The sentiment was most pronounced in Metro Manila, where many of the reported killings in the war on drugs happened.

Twenty-five percent believed the police and 28 percent did not believe the police.

The percentage of the undecided declined to 45 percent in September from 48 percent in June.

The survey covered 1,500
respondents and had a margin of error of plus or minus 3 percentage points.

PNP Director General Ronald dela Rosa questioned the release by SWS of its survey results, particularly those casting doubt on the police, calling it a “piecemeal attack.”

“They released that survey before. Now they are slowly releasing (the survey), question by question, which is like they are running out of ammunition to hit the PNP with,” Dela Rosa said at a press conference.

Presidential spokesperson Ernesto Abella said the sentiments aired during the National Day of Protest “may have spilled over” the period when the survey was conducted.

On Sept. 21, protesters across the country assailed the killings of drug suspects and the specter of one-man rule.

“You cannot hide the truth, as the cases become numerous the people will naturally learn about it. It’s common sense,” said Caloocan Rep. Edgar Erice.

“[T]he administration should now seriously reorient its antidrug campaign away from the current fascist thrust that resulted in thousands of extrajudicial killings,” Zarate said.

Rep. Robert Ace Barbers maintained that the PNP should not be blamed for the deaths as rogue policemen and politicians may have been involved.

Dela Rosa likened the piecemeal attack by SWS to firing one bullet at a time from the same magazine. “If nobody’s criticizing the PNP and everything is quiet, they fire a shot.”

The PNP chief said the police were already out of the war on drugs “and you are still bringing up questions which have been settled a long time ago.”

President Duterte took his war on drugs away from the PNP on Oct. 10 and designated the Philippine Drug Enforcement Agency as the “sole agency” that will carry out operations against the narcotics trade.

Mr. Duterte’s move was seen as the administration’s effort to eliminate deadly police raids that have marred his campaign against illegal drugs.

By geographical area, net opinion about the truthfulness of the police was lowest in Metro Manila at -34.

It was -31 in Luzon outside Metro Manila, -15 in the Visayas and +3 in Mindanao. –Reports from Inquirer Research, Leila B. Salaverria. Jeannette I. Andrade and Vince F. Nonato