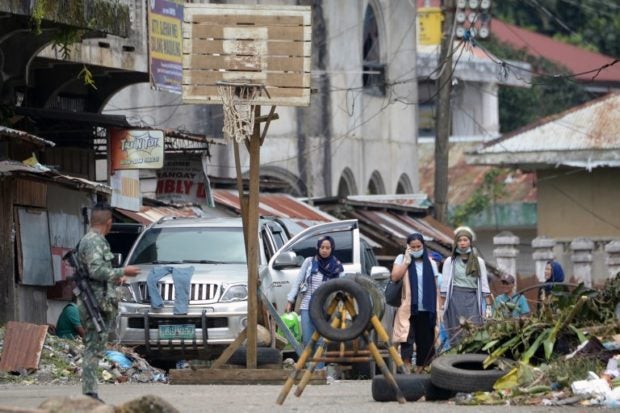 A soldier (L) keeps watch as residents returning to inspect their homes walk past near the battle area of Mapandi in Marawi, on the southern island of Mindanao on October 24, 2017, a day after the military declared the fighting over. / AFP PHOTO / TED ALJIBE

MARAWI CITY – The task of clearing the city of debris and the demolition of buildings severely damaged by the five-month battle between government security forces and Islamic State-inspired militants would not just be physically challenging but would also be emotionally difficult for the locals, Mayor Majul Gandamra said.

“Emotionally, very hard for us to see the ruins and destruction left by the atrocities committed by the militant group,” Gandamra told the Inquirer.

He said the destruction would remind them “of how my people suffered during the five month ordeal.”

Gandamra said they have expected the destruction to be massive in areas where the heaviest firefights have occurred – the 24 villages that the IS-inspired gunmen had tried to hold on to for the past five months – that “(p)hysically, it will definitely take us long period of time to fully reconstruct Marawi and make it livable especially in the war-torn (areas).”

Villages such as Mapandi, Bangolo, Raya Madaya and Dansalan were among the 24 main battle areas and had also come under heavy aerial bombardment during the fighting.

Gandamra said clearing the city of debris cannot be possibly done without the aid of tools and heavy equipment.

“High-tech heavy equipment are necessary especially in the demolition process and the proper collection and disposal of debris,” he added.

Gandamra said because of the Herculian task ahead, the people of Marawi needed all the help they can get – including in the task of rehabilitation and rebuilding of the city.

“In this regard, we need the tremendous effort and support – on the part of the government – to implement such needed reconstruction and rebuilding,” he said.

Col. Romeo Brawner Jr., the deputy commander of the Joint Task Group Ranao, said the clean up of villages mostly affected by the fighting could take place after the military had completed its mopping up operations and recovery of unexploded ordnance, improvised explosive devices, booby traps and firearms that the defeated militants had left behind.

Brawner said the mopping up operations also included reconnaissance firing to determine if indeed no more militants had been left after the final battle of Monday.

“After we have finished the mopping up operations and had recovered all dangerous materials, the clean up will follow. We will be working hand in hand with the local government units on this endeavor,” he said.

Brawner said the military and personnel from the Lanao del Sur and Marawi City LGUs and representatives from government agencies such as the Philippine National Police, the Bureau of Fire Protection and the Department of Health, will also be working together for the recovery of human remains inside the main battle areas once these had been cleared of unexploded ordnance and IEDs.

“We cannot put the lives of those working for the recovery of cadavers in danger,” he added.

Brawner said once all clearing, recovery and clean up activities had been completed, the actual rebuilding of the city could start.

Architect Felino Palafox Jr., who had offered help in the post-conflict efforts for the city, said he and his fellow architects and planners, Lito de Jesus and Mikey Ramos, “were heartbroken over what we saw as the military took us around ground zero.”

“Marawi is a progressive and thriving city with mid-rise buildings, schools, hospitals, business and grand mosques and masjids. Almost everything beyond the bridge (in Mapandi and Bangolo), were burned down and destroyed. We were holding back tears as we were told of the significant events. Truly, no one wins in war,” Palafox said in an analysis he wrote last week.

Palafox, an internationally recognized urban planner who helped build cities such as Dubai, however said he believed that the city would be able to rise from destruction.

“Marawi can become the city of peace,” he said. /je