All quiet in Marawi; 42 terrorists dead

CLARK FREEPORT — The government on Monday declared an end to fierce urban warfare in Marawi after troops killed the last pro-Islamic State (IS) terrorists who seized the city five months ago to establish an enclave of the Middle East-based jihadi group in Southeast Asia.

He said government troops prevailed in the battle for control of a building where the Maute and Abu Sayyaf terrorists made their last stand.

Troops recovered 42 bodies of the last group of terrorists, he said.

Gen. Eduardo Año, chief of staff of the Armed Forces of the Philippines, also said 42 bodies were found — not in one but two buildings and a mosque.

The military said on Sunday that a last group of about 30 terrorists, their wives and five foreign fighters were making a last stand in a two-story building next to Lanao Lake and that troops were launching an assault to bring the fighting to an end.

The Associated Press reported on Monday that two security officials, who requested anonymity because they were not authorized to make public the latest developments in Marawi, had disclosed that troops found the bodies after capturing the building.

It was unclear how the terrorists found in the building died, but it was possible some committed suicide after they were cornered by troops, said one of the officials.

It was also possible that a few terrorists might still be hiding.

Reuters reported that artillery and automatic gunfire were still heard on Monday morning and its reporters saw flames behind a mosque.

Maj. Gen. Restituto Padilla Jr., spokesperson for the military, confirmed there was still gunfire but said there were “no more terrorists” and the troops’ last battles were with an enemy decimated by the loss of its leadership.

“They were formless, they had no place to run,” he said.

Lorenzana said the identities of the final 42 bodies had not been determined and some were beyond recognition.

“Those are the last group of stragglers of Mautes and they were caught in one building so there was a firefight, so they were finished,” Lorenzana said.

He said the last hostages the terrorists had been holding were recovered earlier.

“All hostages have been recovered. There are no more militants inside Marawi City,” he said.

When asked if foreign fighters were among those killed, Lorenzana said: “We have not yet determined that.”

He thanked the United States for providing technical intelligence that enabled the Philippine military to defeat the terrorists and regain control of Marawi. 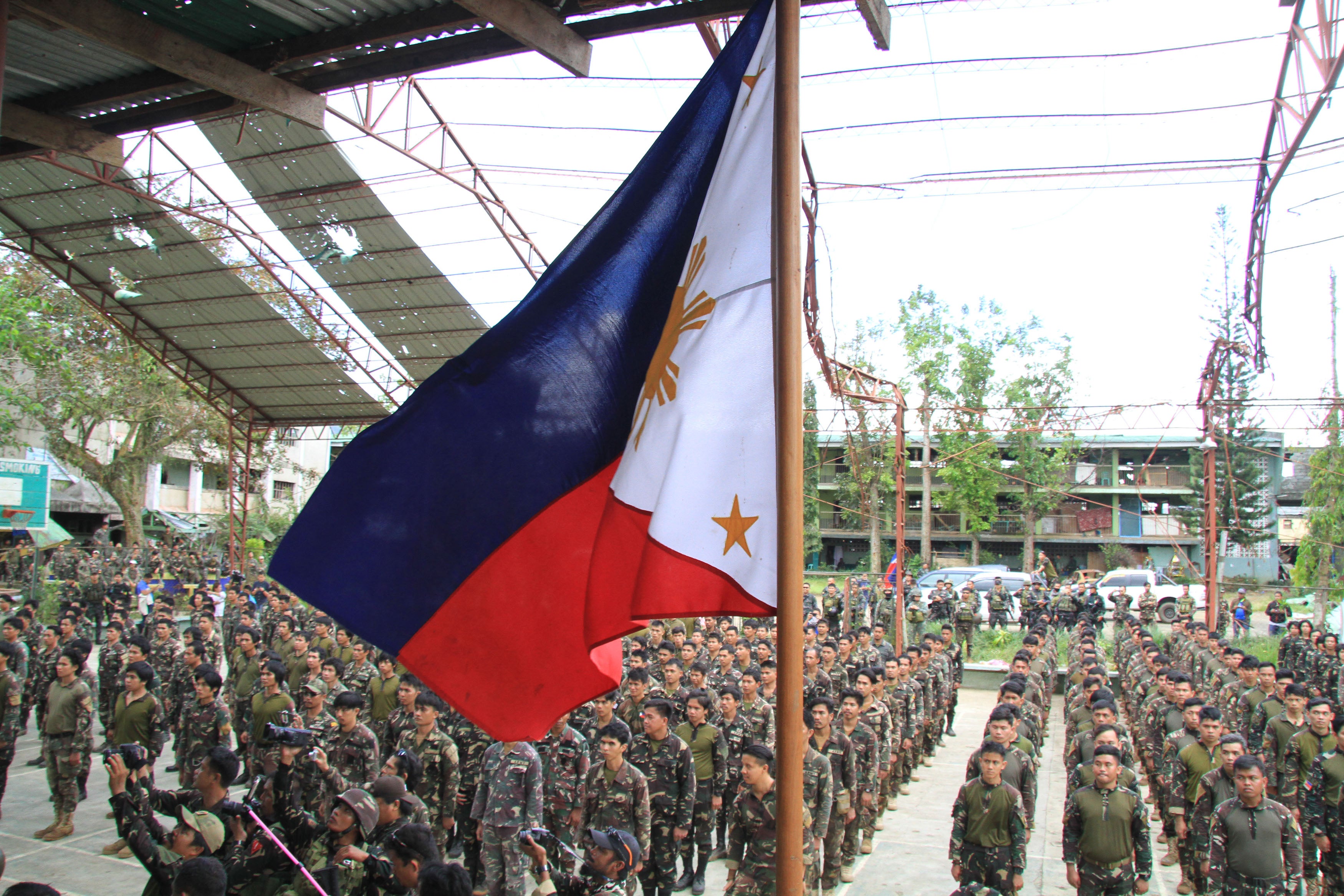 “The US gave us images of the enemies,” he said.

Lorenzana also thanked China for donating sniper rifles, which were used in the fight against the terrorists.

Malacañang commended the military for retaking Marawi from the terrorists.

Presidential spokesperson Ernesto Abella called for unity among Filipinos as the rebuilding of Marawi began following the city’s liberation from the terrorists.

“The fighting in Marawi has ended. Since the rebellion started 154 days ago, almost a thousand terrorists have been killed, including [their] leaders Isnilon Hapilon, Omar Maute, Mahmud Ahmad, among others,” Abella said in a statement.

“We have successfully concluded what has been, so far, the most serious threat of violent extremism and radicalism in the Philippines and Southeast Asia,” he added.

Lorenzana said the military campaign against the terrorists in Marawi was the Philippines’ contribution to maintaining peace in Southeast Asia.

“While we submit that these tactical and strategic gains will not annihilate the ideology completely, we declare that this achievement is clear manifestation of how our regional cooperation can lead to decisive advance against the proliferation of terrorism in this part of the world,” he said.

Fighting terrorism is high on the agenda of the Asean defense ministers’ meeting.

As the meeting opened, the head of the Brunei delegation expressed condolences for the loss of lives in Marawi but congratulated the Philippines for being able to liberate the city.

Hundreds of terrorists from the Maute and Abu Sayyaf groups, waving IS group-style black flags and backed by foreign fighters, laid siege to Marawi on May 23 to carve out an IS province in the region.

The disastrous uprising, which has displaced hundreds of thousands of Marawi residents, erupted as the Philippines was hosting annual summit meetings of Asean this year, along with the 10-nation bloc’s Asian and Western counterparts, including the United States and Australia.

The United States and Australia have deployed surveillance aircraft and drones to help the Philippine military rout the Marawi terrorists.

Last week, government troops killed the last two leaders of the siege — Hapilon, an Abu Sayyaf commander said to be the IS “emir,” or leader, in Southeast Asia and on whose head the United States had put a $5-million bounty, and Maute, one of two brothers who led the Maute terrorist clan of Lanao del Sur province.

Their bodies had been recovered and identified. DNA tests done in the United States on the request of the Philippine military confirmed the death of Hapilon.

The body of Mahmud, a top Malaysian militant believed to have bankrolled the siege of Marawi, has not been recovered.

Following their deaths, President Duterte traveled to Marawi and declared the city had been “liberated from terrorists influence” and said the rehabilitation of the city had begun.

But fighting continued up to Monday when the last group of terrorists refused to surrender.

Col. Romeo Brawner Jr., deputy commander of the military task force battling the terrorists, told reporters on Monday that the bodies of the terrorists were to be taken out of the building where they had made their last stand.

He said all but two of the terrorists inside the building were killed on Sunday night.

The last two remaining terrorists were killed in the building’s basement at dawn on Monday, he said.

The final assault consisted of close-quarter combat and artillery attacks, he added.

Padilla said the troops tried to convince the remaining terrorists to surrender, but they refused.

Two of those killed were wives of fighters, he said. –With reports from Tonette Orejas, Philip C. Tubeza, Divina Suson, Jeoffrey Maitem, Richel Umel, and the wires