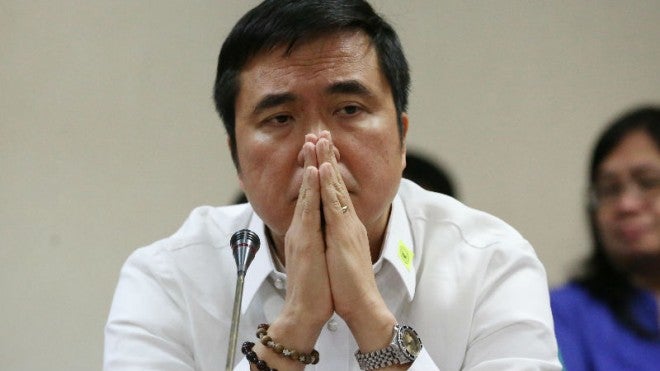 The Department of Transportation (DOTr) on Monday filed a graft complaint against former Transportation Secretary Joseph Emilio Abaya and executives of a Korean-Filipino joint venture firm over the P3.81-billion maintenance contract of the Metro Rail Transit (MRT) 3.

When told about the complaint DOTr Undersecretary Reinier Paul Yebra lodged against him and at least 20 others, Abaya said he had not seen the complaint but looked forward to clearing his name.

“Our decision has always been guided by our conscience and our compliance with procurement laws and laws with regard to the procurement of the maintenance provider,” Abaya told the Inquirer.

In the complaint, the DOTr accused Abaya and several other ex-officials of the then Department of Transportation and Communications (DOTC) of conspiring to award the contract to the joint venture Busan Universal Rail Inc. (Buri).

The case stemmed from the undated Special Order No. 2015-059, signed by Abaya, that paved the way for a negotiated bidding for the MRT 3 maintenance system contract.

Buri, which now maintains the MRT 3, was only incorporated by the five companies on Jan. 4, 2016, three days before the maintenance contract was signed on Jan. 7, 2016.

The DOTr said former DOTC Assistant Secretary Camille R. Alcaraz, chair of the bids and awards committee (BAC), even wrote the Securities and Exchange Commission on Dec. 23, 2015, asking the agency to “facilitate” the incorporation of Buri.

However, the DOTr said the contract was awarded although Busan JV failed to submit a valid joint venture agreement as required by Republic Act No. 9184.

Despite the award of the multibillion contract, there were a total of 649 service interruptions and passenger unloading on the MRT 3 in 2016, or almost two cases every day.

This year, there have been 284 service interruptions and passenger unloading incidents.