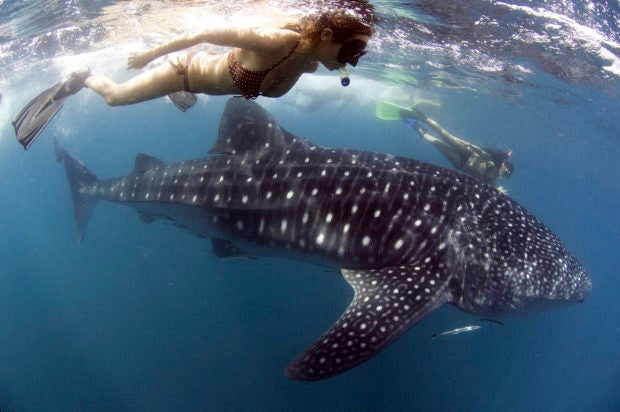 SEA ENCOUNTER Tourists swim alongside a huge whale shark as part of an interactive encounter in the waters of Donsol, Sorsogon. —AFP

Whale sharks, locally called “butanding,” should be reclassified from vulnerable to endangered, according to the Department of Environment and Natural Resources (DENR).

The DENR will propose the inclusion of the butanding (Rhyncodon typus) and three other migratory species for protection under the international convention of the Conservation of Migratory Species (CMS) of Wild Animals.

The Philippines is playing host to the 12th Conference of 124 State Parties to the Convention on Oct. 23-28, the first time the triennial meeting is being held in Asia.

The Biodiversity Management Bureau (BMB) of the DENR said the Philippines would propose the “uplisting” to Appendix I of the CMS list of the whale shark and the Christmas frigatebird (Frigata andrewsi), and to Appendix II the black noddy (Anousminutus) subspecies worcesri, white-spotted wedgefish (Rynchobatus australiae) and the yellow bunting (Emberiza sulphurata).

Appendix I lists migratory species in danger of extinction, while Appendix II refers to “vulnerable” migratory species, or those with “unfavorable conservation status,” to be conserved through international agreements.

Parties that are “range states” or “pathways” to the species listed in Appendix I are obliged to protect them by prohibiting the taking of such species, conserving and restoring their habitats, and preventing, removing or mitigating obstacles to their migration and other factors that might endanger them.

Range states to species listed in Appendix II are merely encouraged to implement global or regional agreements for their conservation and management.

A species is classified as endangered if its numbers declined at least 50 percent over the past three generations. According to researchers, the number of whale sharks, the world’s largest fish, has halved in the past 75 years.

So far, the Philippines has taken the lead in the inclusion of at least 10 species on the CMS list. This year, state parties will propose a total of 35 species for inclusion.

To underscore the importance of biodiversity in the Philippines, BMB Director Mundita Lim said in a press conference that the Philippines was a pathway of several migratory species, including the East-Asia and AustralAsia “flyway.”

In line with this, the DENR and the tourism department are drafting a code of conduct for whale shark watching in the Philippines, according to Lim.

On Sunday, international environmental ministers and advocates conducted a panel discussion, which hoped to fine-tune and finalize the Manila Declaration on Sustainable Development and Migratory Species.