Rescued hostages bare abuses by IS 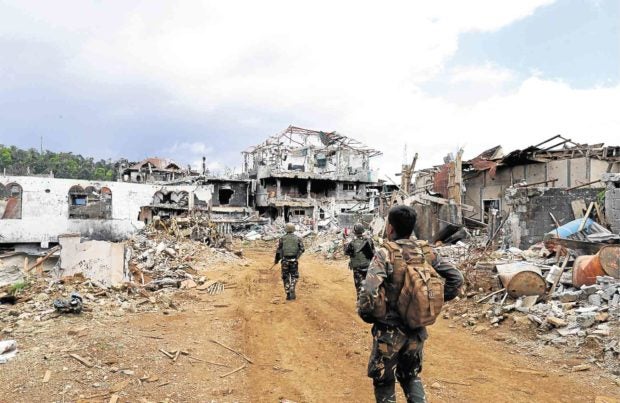 MARAWI CITY — The suffering of civilians kept hostage for nearly five months by Islamic State (IS) terrorists here had been just stories being passed around among soldiers fighting IS until government troopers came face-to-face with 11 of the hostages and their harrowing ordeal.

When the 11 hostages were rescued on Oct. 16, the soldiers who laid their lives on the line to keep the civilians safe also got a closeup view of how residents of the predominantly Muslim city were made to endure all types of abuses in the hands of IS.

Moments after the two top leaders of IS in the city — Isnilon Hapilon and Omar Maute — were killed, 11 civilians emerged from where they had been kept and saved by soldiers who heard the people’s cries inside the armored personnel carrier (APC) that took the civilians in.

Sgt. Christopher Lorenzo, of the 1st Cavalry Squadron of the Philippine Army’s Mechanized Infantry Division, was the driver of the APC that was used to transport the 11 hostages, five of them children, including a 2-month-old baby.

The first to be rescued, according to Lorenzo, was a middle-aged woman and her baby, two months old. Although they were already inside the APC being driven by Lorenzo, the woman kept crying, saying a daughter, 3 years old, had been left behind in their rush to run toward soldiers some 500 meters from the building where they were held hostage by the terrorists.

The 3-year-old girl, Lorenzo said, was left behind because she had a gunshot wound on a foot and could barely walk. “She wore no slipper and there were shards on the way,” the APC driver said.

The soldiers were told that snipers were still positioned inside the building from where the civilians fled.

“They still have snipers, sir,” one woman, among the 11 rescued hostages, told soldiers.

But Lorenzo said soldiers involved in the rescue ignored the warning. Upon seeing the 3-year-old girl running to the direction of government troopers, soldiers rushed toward the girl and were able to avoid sniper fire.

Lorenzo said the child tried to run fast to the soldiers’ direction but shards of glass obviously aggravated her foot injury.

One of the soldiers seized the chance to grab the girl, hug her and keep her away from terrorist fire.

Inside the APC, the girl would not stop crying as she asked for her mother, Lorenzo said.

“We all cried, the soldiers cried,” he said. “I imagined she was my child,” the APC driver said.

Inside the APC, the civilians immediately asked for water.
“They did not stop crying,” Lorenzo recalled, adding that the people looked starved.

“I wanted to give them biscuits but that time, we ran out of supply,” he said.

Lorenzo said one boy, who was around 5 years old, kept on shouting “Papa, Papa,” while inside the APC.

Lorenzo said it was so devastating looking at the boy who would not stop looking for his father.

According to the other hostages, the terrorists had forced the boy’s father to carry a firearm and fight government forces.

“The father could be dead now,” he said. “We didn’t know him,” Lorenzo added.