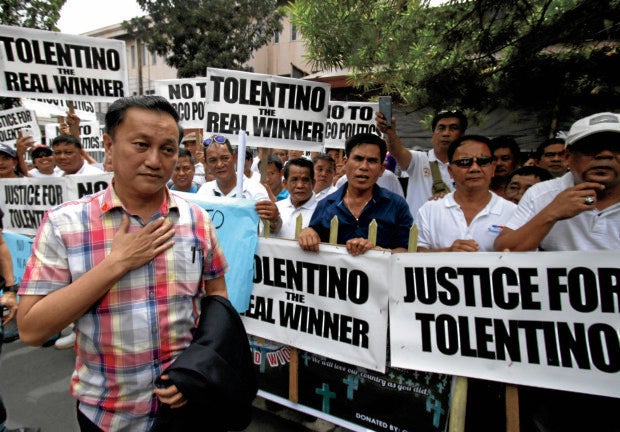 As the Senate Electoral Tribunal (SET) finally began a manual recount of 635 contested ballot boxes, Tolentino, now the presidential adviser on political affairs, raised these observations as he protested the victory of President Rodrigo Duterte’s nemesis, Sen. Leila de Lima, who secured the 12th Senate seat with a wide margin of 1.28 million votes.

“We are trying to get some patterns here, although (this may) take long because it’s a meticulous process,” Tolentino told reporters outside SET in Quezon City on Friday.

SET began on Wednesday the “revision” process for the ballot boxes where votes in Tolentino’s favor were allegedly not counted, or the SD cards used by Smartmatic’s Vote Counting Machines could have been preloaded with votes.

Through the revision process, “pilot precincts” that showed signs of significant anomalies would prompt the opening of all protested ballots, and eventually lead to the trial stage of the election protest.

Asked if the presence of 2013 ballots indicate a possibility of ballot-stuffing, Tolentino said: “We can only speculate.” But for him, these old ballots “showed symptoms” of irregularity in the Calbayog City elections.

Tolentino also questioned why he got zero votes in Isabela City, Basilan province and six other areas in the Autonomous Region in Muslim Mindanao.

These municipalities are Sumisip and Tabuan-Lasa in Basilan province, Datu Odin Sinsuat, Matanog and Parang in Maguindanao province, and Turtle Islands in Tawi-Tawi province.

He said this was “statistically impossible,” because he at least had a poll watcher in the said areas. He also found “improbable” that he lost badly in some municipalities in Maguindanao while winning in the province as a whole.