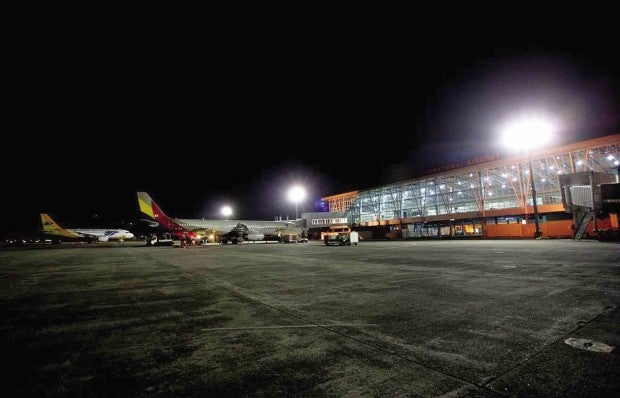 For about 20 years, the Clark International Airport inside the Clark Freeport had been underutilized until President Rodrigo Duterte identified it as a solution to the air traffic congestion at the Ninoy Aquino International Airport. Clark airport will get an upgrade in 2018. INQUIRER file photo / TONETTE OREJAS

To help decongest the Ninoy Aquino International Airport (NAIA), the government is rushing the upgrade of eight airports across the country to make them capable of night-flight operations, a lawmaker said Saturday.

The repairs include the widening of the breath of the runway and the upgrade of terminal facilities for night-flight capabilities.

“Several domestic flights departing Manila are being crammed during the daytime because of the inability of many provincial airports to receive flights at night. This has somewhat contributed to the jamming of the NAIA, which has only two runways handling both international and domestic flights,” Campos said in a statement.

The lawmaker said provincial airports unable to operate at night also have to send out all their Manila-bound flights during the day.

Currently, Campos said only 19 of the country’s 42 airports are able to receive and dispatch night flights.

“There’s no question air travel around the country will be easier for everybody, including foreign tourists, once we get all our airports running at night to maximize their operations,” Campos said.

Campos said the government has set aside a total of P10.1 billion in fresh funding to modernize the infrastructures of 40 airports in 2018, with Clark International Airport getting the biggest slice of P2.74 billion.

He noted that 13 other smaller airports across the country would also get a combined P262.61 million, or an average of P20.20 million each, for infrastructure upgrades. /jpv