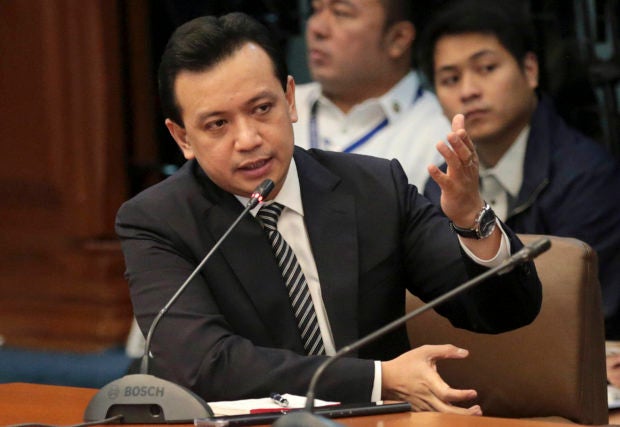 Trillanes has left for the United States and met with Rubio, a Republican senator from Florida who had expressed concern about the drug killings in the Philippines.

In reaction, the senator said on Friday that he only presented “factual information” about the Philippines to senior American officials he had met during his recent trip to the US, adding that  he did not dissuade US President Donald Trump from visiting the Philippines amid the controversies clouding the Duterte administration.

“To be clear, I did not try to stop the state visit of President Trump since these things are carefully planned and cannot be stopped on the mere say so of a Philippine senator,” Trillanes said.

Cayetano said Trillanes had also been critical of past presidents when he was a member of Congress, but claimed that he drew the line at toppling the government.

“I worked with Senator Trillanes in the past and you know my respect to the Senate as an institution. All I can say is, although it’s a free world, it doesn’t help the country where there’s misinformation, disinformation, especially false information,” Cayetano told reporters on the sidelines of a forum on the Association of Southeast Asian Nations (Asean).

“Even when I was a staunch critic of some presidents, I’ve never gone abroad to ask for help to topple them,” he said.

“That’s the speculation now, but the DFA (Department of Foreign Affairs) doesn’t deal with speculation. Unless we have confirmation, we will assume that is in good faith and that is a normal engagement,” he added.

Trillanes, a fierce critic of President Duterte, has reportedly been connecting with some of the senators whom Cayetano tried to meet during his recent monthlong stay in Washington DC and New York City.

Rubio confirmed his meeting with Trillanes on his Twitter account, and said they discussed Philippine-US alliance, the fight against corruption, and the protection of human rights amid the narcotics crisis.

Commenting on the meeting, Abella said: “We do hope that the correct information has been given and not biased information designed to adversely affect US-Philippine relations.”

Cayetano said he had requested a meeting with Rubio, but the senator was busy attending to the aftermath of a hurricane in Florida.

“[Trillanes] is going to the same people we offered to engage with to show them the real numbers and get their staffers to meet our staffers and talk about it,” Cayetano said.

Rubio was one of two legislators who earlier introduced a bill to restrict the supply of defense equipment to the Philippine National Police amid concerns on the drug killings in the country.

“America and the Philippines have an important and enduring alliance, which is why the growing number of extrajudicial killings as part of the Philippine National Police’s ‘war on drugs’ is deeply alarming,” the US senator had earlier said.

Trillanes  said he had met with US officials, including Rubio, to talk about improving Philippine-US relations, and how to address issues on corruption and human-rights situation in the country.

“Unlike the officials of the Duterte administration, I presented only factual information,” Trillanes said in a statement.

“Besides, you cannot fool the US government; they know what’s happening in our country,” he added.

Trump will attend the Asean leaders’ summit in Manila next month as part of his 12-day tour in Asia from Nov. 3 to 14.

While Trump will meet Mr. Duterte, who chairs the 10-nation Asean this year, the DFA has not confirmed any bilateral meeting of the two leaders.