Duterte to the West: Want to help us? Do it the civilized way | Inquirer News
Close
menu
search

Duterte to the West: Want to help us? Do it the civilized way 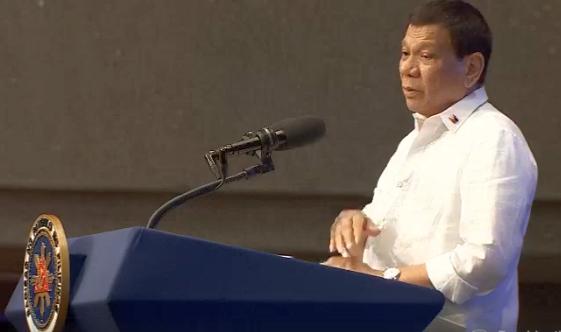 President Rodrigo Duterte on Thursday said he would be glad to give any Western country the lead role to deal with the Philippines’ problems as long as they do it the “civilized way.”

Duterte made the statement as he again slammed the “Western world” for meddling in the domestic affairs of the Philippines.

“These are the things I would like to address myself now to the Western world. Please do not impose your will on us. Do not derogate our sovereignty by lecturing on us the civilities of a country, which we term a democratic state,” he said in a speech at The High Level Forum on [email protected] in Pasay City.

Duterte, who has received heavy criticisms on his brutal war on drugs and anti-criminality efforts, insisted that his administration was only trying to “correct” social injustices in the country.

The President said he would be glad if any Western country would be able to help the country solve the problems in the Philippines the civilized way.

“Tell us. If you are ready to deal with the problem, I’d be happy to order my soldiers and policemen just to relax. And if any Western countries are interested to do it the civilized way, then come, I am inviting you to join the fray and I would be glad  to appoint you the lead role in the problem,” he said.

“Otherwise, if you cannot stop interfering, at least be educated in your assessment,” he added.

He said “all countries suffer from social problems” and the “Philippines is no exception.”

“Plenty. But we try to correct it with meager resources,” he said.

Aside from Western countries, human rights groups and other international organizations have slammed Duterte for his vicious campaign against illegal drugs, including alleged extrajudicial killings and human rights violations under his administration.