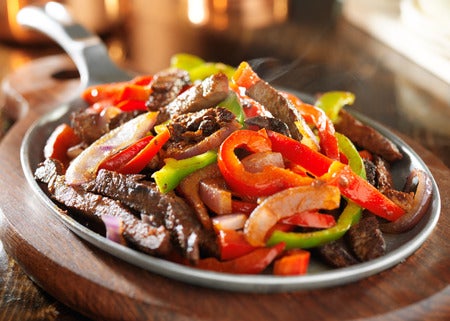 A justice department employee in San Benito, Texas has taken a big bite of reality when he was charged with first degree theft on Oct. 10 for stealing $1.2 million worth of fajitas.

According to local news site The Brownsville Herald, Gilberto Escamilla admitted that he had been stealing the food for nine years. He was confronted by his department when a suspicious delivery of fajitas weighing 800 pounds had been received.

Labatt Food Service, which supplies meat to the kitchen of Cameron County Juvenile Justice Department, called someone in the department to inform them of an 800-pound delivery of fajitas. Unfortunately, on the day of the call, Escamilla was on leave for a medical appointment. A woman who took in the call clarified that the kitchen does not serve fajitas. The man who made the call said Labatt has been delivering it to them for nine years. Escamilla was confronted about it all when he got back to work and he admitted to stealing the fajitas.

District Attorney Anthony Saenz likened the situation to a Saturday Night Live skit, “[b]ut this is the real thing.”

After they arrested Escamilla on Aug. 9, they found packets of fajitas in his refrigerator valued between $2,500 to $30,000.

“He would literally, on the day he ordered them, deliver them to customers he had already lined up,” Saenz said.

Also found in the investigation was a failure in chain of authority, meaning the department auditor did not thoroughly check what was delivered every time a receipt is issued to them.

Because of the incident, department chief Juvenile Probation Officer Rose Gomez vowed that they will review their department policy on receiving food orders.

“The Juvenile Justice Department is working closely with the Auditor’s Office to institute procedures, controls and safeguards to avoid a recurrence of this type of situation. The Department expects that wrongdoers will be punished and assures that procedures and protocols have been established,” Gomez said in a statement.

Saenz said that this case is upsetting for the community as it “takes a big bite out of [the taxpayer’s] paycheck.” Katrina Hallare/JB