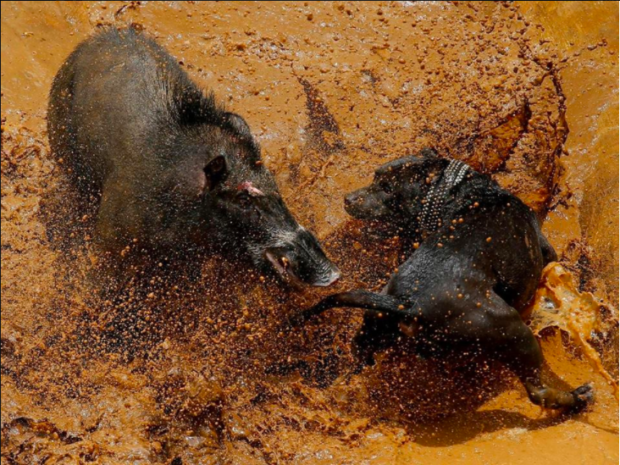 A sadistic sport involving staged fights between dogs and captive wild boars in Indonesia has caught the ire of animal rights activists.

Known among locals as “abu bagong” (boar fighting), the sickening practice takes place around bamboo-walled arenas in the remote parts of Java island, where the animals are forced to fight until one is left injured or dying.

Villagers in attendance bet on the dogs to kill the boars, while owners of the winning canines could receive as much $2,000 (over P100,000), The Independent reports.

Surviving boars live to fight another day, but will return to the arena once healed. Losers, however, will be butchered and sold for meat.

“The vicious and exploitative fighting of dogs and wild boars in Indonesia is a disturbing spectacle that must be condemned,” Wendy Higgins, a spokesperson for Humane Society International told the news outlet.

“Watching animals savagely fight each other must never be considered entertainment, nor excused as culture,” she added.

Some villagers, meanwhile, defended the fighting, claiming overpopulation of wild boars threatened their crops. They also claimed that the contest helped enhance the agility and hunting abilities of the dogs.

The “abu bagong” spectacle dates back to the early 1960s in West Java and has become a source of entertainment and income for most locals.  Khristian Ibarrola /ra