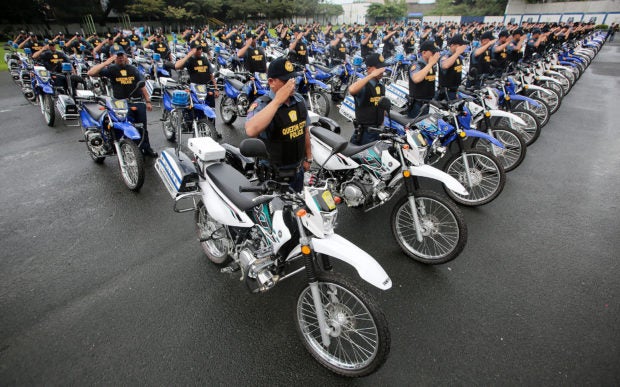 Hoodlums who attack in pairs aboard motorcycles, colloquially known as “riding in tandem,” may soon meet their match in Quezon City cops.

The city’s police force has received 150 new motorbikes from the local government to patrol the streets against these hoodlums.

The city government on Wednesday turned over the bikes, as well as 485 bulletproof vests, to the Quezon City Police District (QCPD) to aid it in combating crime.

With the removal of the Philippine National Police from the war on drugs, PNP Director General Ronald dela Rosa earlier said his men would set their eyes on criminals on motorbikes instead.

Under the Duterte administration’s war on drugs, motorcycle-riding hoodlums have gunned down hundreds, mostly suspected drug users or pushers.

The new motorbikes were marked with QCPD logos and equipped with blue-colored emergency light and alarm siren.

The District Traffic Enforcement Unit would receive 18 bikes, and the QCPD Batasan police station, which has the biggest jurisdiction in the city, 15 units.

Chief Supt. Guillermo Eleazar, QCPD director, said all 150 bikes had been registered, but the police department had yet to confirm whether these would bear a temporary registration plate.

A total of 260 motorbikes from the city government are now with the police, in addition to over 200 four-wheel vehicles, he noted.

“With these vehicles, we have the mobility to control our area of responsibility more thoroughly and more intensively, and respond more rapidly,” Eleazar said.

In a separate interview, Eleazar said gathering information against criminals on bikes were more difficult than targeting drug pushers.

Other than intensive checkpoints, he said there would be “special focused operations” against the armed criminals in lieu of antinarcotics operations.

These will be based on information gathering and intelligence monitoring of the criminals’ activities.

During the turnover ceremony, Mayor Herbert Bautista disclosed plans to further improve the police force, including the donation of at least 500 short and 100 long firearms, as well as antiriot equipment, such as helmets and shields.