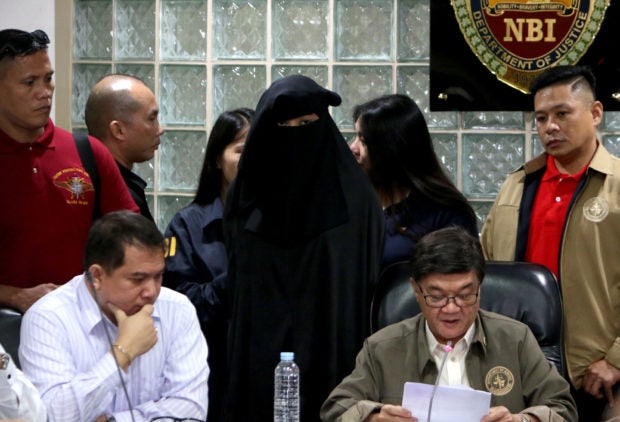 Karen Aizha Hamidon, the widow of a former leader of a small extremist group in Mindanao, was arrested at her home in a Manila suburb a week ago and has been charged with inciting to rebellion in the Department of Justice (DOJ), Aguirre told a news conference.

Hamidon, 36, is accused of using social media and messaging apps to call on foreigners to join the siege by an alliance of Maute and Abu Sayyaf terrorists and foreign militants in Marawi City, a battle that has lasted nearly five months.

“This is a welcome development in the fight against terrorism,” Aguirre said.

NBI agents found Hamidon had made 296 posts in chatrooms on Telegram and WhatsApp “calling on Muslims in the Philippines, India and Singapore to come to Marawi to establish a province of [IS],” Aguirre said.

There were also about 250 names, mostly foreigners, in her phonebook who were suspected of being IS sympathizers, he said.

Dressed in a black burqa, Hamidon was paraded before reporters but was not allowed to speak.

Her laptop, cell phones and electronic gadgets were being looked at by experts for forensic investigation.

The NBI said in a statement that Ansar Al-Khalifa worked with the Maute group for the bomb attack on a night market in Davao City in September 2016 that killed 15 people.

Ansar Al-Khalifa was also responsible for the failed bomb attack on the US Embassy in Manila in December 2016, the NBI said.

Maguid was killed in a gunfight with police in Sarangani province in January, it said.

Aguirre said Hamidon was also linked to Singaporean and Australian extremists, both of whom are in detention in their countries.

But counterterrorism expert Sidney Jones, head of the Jakarta-based Institute for Policy Analysis of Conflict, cast doubts about whether Hamidon had been effective.

Jones said Hamidon’s presence in chatrooms of IS supporters was not welcomed, her credibility had been questioned and some participants blamed her for the arrests of radicals.

“Everyone hates her and thinks she’s a spy,” Jones said. —REPORTS AIE BALAGTAS SEE AND THE WIRES

Read Next
Gov’t warns of retaliation by terrorists
EDITORS' PICK
Metro Manila to remain under COVID Alert Level 2 until December 15
Legarda: Ending Violence Against Women, a cause for all
A delightful blessing!
Duterte open to making jabs mandatory; Cabinet mulls ‘pressuring’ the unvaccinated
IATF tightens border control, suspends entry of fully vaxxed nationals from ‘green’ countries
Villar Group gears up for AllValue Shopping Party on Dec. 3; around P 1-million promos and discounts up for grabs
MOST READ
Quiboloy warns of ‘much worse than Omicron virus’ if his ‘persecution’ is not stopped
Bongbong Marcos’ conviction in tax case not a crime involving moral turpitude — lawyer
Marcoleta defends pol ads on ABS-CBN
IATF tightens border control, suspends entry of fully vaxxed travelers from ‘green’ countries
Don't miss out on the latest news and information.