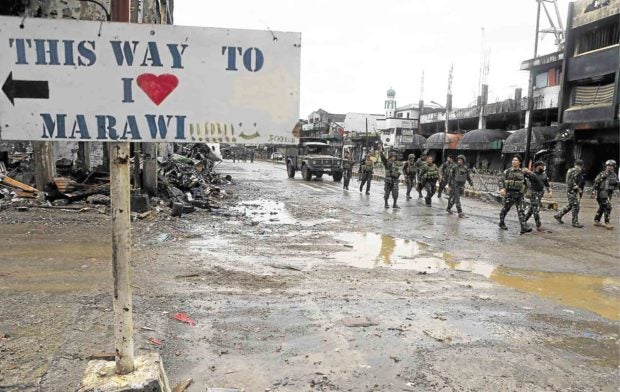 Lorenzana, in an interview here on Monday, said the government would need the funds ready by next year for the full-swing rehabilitation of the city.

On Tuesday, the President declared Marawi “liberated from terrorists’ influence” following the deaths of top terrorist leaders Isnilon Hapilon and Omar Maute during a military operation on Monday.

Architect and urban planner Felino Palafox Jr., who committed to help in the reconstruction of Marawi, recommended to provincial officials of Lanao del Sur to make the ruins of Marawi a historic memorial as a reminder of how terrorism could destroy a peaceful city.

“I’ve been in post-disaster rehabilitation [programs] — big earthquakes, tsunami and big floods — [and] Marawi is the worst [I have seen],” Palafox told reporters here also on Monday.

“We still believe that the ground zero should be preserved as a lesson for future generations,” he said.

Palafox said local officials had “accepted in principle” his recommendation.

“Their only concern was social acceptance,” he added.

“Rehabilitate, maybe, the places of worship, education and the significant buildings. The damaged ones, they can be retained, especially those full of bullet [holes] as a lesson for the future on how terrorism can destroy a peaceful city,” Palafox said. 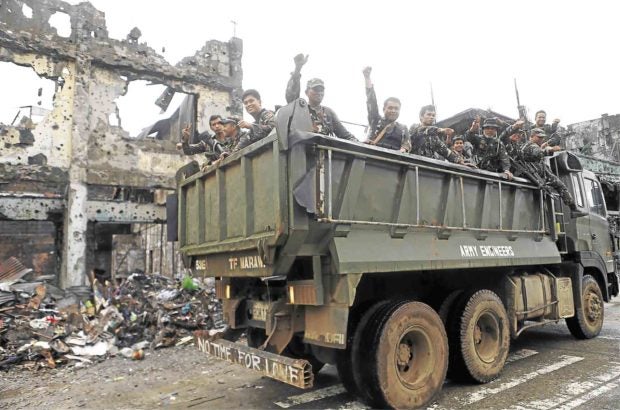 Palafox, citing the extent of destruction in the city, estimated that it might take “70 years” to bring Marawi back to what it was before Islamic State-inspired terror groups, led by Hapilon and Maute and his brothers, laid siege to the city on May 23.

Intense fighting and airstrikes since May reduced sections of the city to rubble, forcing thousands of residents to flee to neighboring cities and provinces. Some families in Marawi left Mindanao to start anew in areas in the Visayas and Luzon.

As of Monday, the death toll on the government side reached 163 while more than 1,700 soldiers were wounded.

The military earlier reported that 822 terrorists and 47 civilians were killed in the fighting.

Lorenzana said the military spent more than P5 billion in the Marawi war.

But in a press conference in Malacañang on Tuesday, Maj. Gen. Restituto Padilla, Armed Forces of the Philippines spokesperson, said the conflict had cost the military at least P2 billion.

The money, Lorenzana said, went to ammunition, fuel, food and allowances of soldiers in the last four months, he said.

“But the Department of Budget and Management has allocated [funds to] support evacuees, for construction of houses [and] repair of bridges up to the end of the year,” Lorenzana told reporters here on Wednesday.