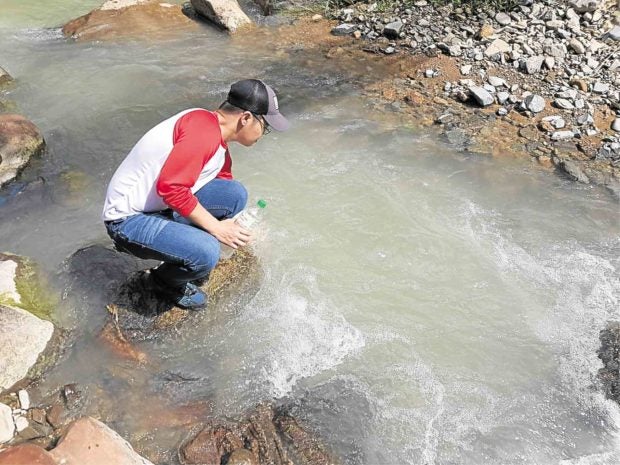 BAGUIO CITY — A river running through the mining town of Itogon in Benguet province turned blue last week due to cyanide likely used by small-scale miners “to dissolve impurities and recover gold,” a government environmental agency said on Tuesday.

The cyanide may have leaked toward Ambalanga River in Barangay Gumatdang in Itogon. Cyanide has been used to dissolve ore and may have triggered a chemical reaction that gives water a bluish hue, said Reynaldo Digamo, Cordillera director of the Environmental Management Bureau (EMB).

He said the blue coloring disappeared by the time government mine engineers inspected the area.

But the results of tests made on one of three sample stations along the river on Oct. 4 showed that the river contained 12.6 milligrams per liter (mg/l) of cyanide, which far exceeded the water quality standard of 0.1 mg/l for class C freshwater like Ambalanga River, Digamo said.

In an Oct. 5 letter to Itogon Mayor Victorio Palangdan, Fay Apil, Cordillera director of the Mines and Geosciences Bureau (MGB), urged the town government to discourage residents from using the river, pending the government’s toxicity probe.

She told Palangdan that the pollution “has something to do with the mining and mineral processing [there].”

MGB had issued stop orders against a pocket mining group near the area as well as six leaching pad operators and a carbon-in-pulp operator, Digamo said.

Apil told Palangdan that these mineral processing facilities had been operating without a permit.

Digamo said the EMB had supported the creation of centralized mineral processing hubs for pocket miners, much like a state-developed gold processing station that does not use cyanide and mercury for separating valuable minerals from ore. It was pioneered this year in Itogon.

Designed by University of the Philippines engineers, based on clean gold research started in 2009, the P25-million plant was built by the Department of Science and Technology for the Benguet Federation of Small-Scale Miners. It began operating in March.

But the project was designed for small-scale miners who were granted government permits, Digamo said. There may be legal issues if it also serves unlicensed miners “because that would mean we tolerate their illegal activities,” he said.

Mining had been a thriving enterprise in Itogon decades before it hosted the first mining companies in the country in the 1900s.