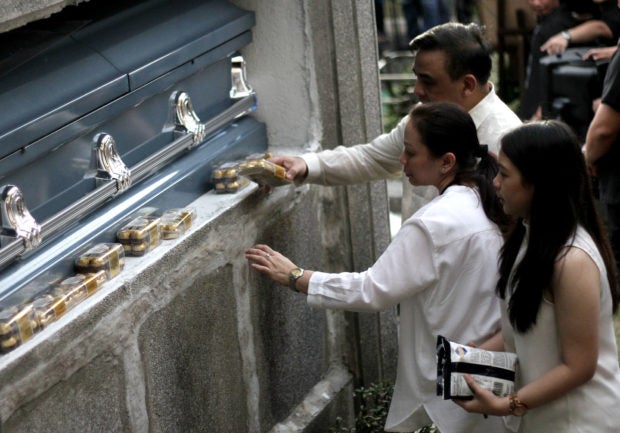 This was how the father of Horacio Tomas “Atio” Castillo III described the exchange of messages among Aegis Juris fraternity members, as he considered the online conversations among the fraternity brothers as an “intention to cover up” his son’s murder.

“Nagulat kami about the chat, parang there was an intention to cover up,” Castillo told reporters after Wednesday’s five-hour Senate hearing on the fatal hazing of the University of Santo Tomas (UST) freshman law student.

(We were appalled about the chat, as if there was an intention to cover up.)

“What’s striking is that a lot of lawyers were involved in this. It’s conduct unbecoming of them,” Castillo said.

Manila Police District (MPD) director Sr. Supt. Joel Coronel presented during the Senate hearing screenshots of messages among members of the Aegis Juris fraternity in their Facebook group chat from September 17 to September 18.

Among the discussions in the chat were clearing the Aegis Juris fraternity library of evidence, denying involvement in the incident, and supposedly maintaining that Atio’s death was an accident.

The victim’s parents were emotional while Senator Joel Villanueva was reading aloud the conversations of the frat members.

Castillo said he will consult with their lawyers if they could file charges against those participating in the group chat, “especially these attorneys tried to conceal evidence.”

The messages also revealed that the frat men considered reaching out to Atio’s parents for a settlement.

But the older Castillo said no one from the organization reached out to them or offered to help them.

“And what kind of settlement gusto nila? You can’t buy life. That’s my son,” he said.

Castillo, however, said that he pities in a way those frat men involved in the murder of his son because “their lives are over.”

“Do you think magiging lawyers pa sila? Tapos na buhay nila. Will you hire them as lawyers in the future knowing kung anong ginawa nila?” he said.                 /kga

Read Next
Abu Sayyaf cousin of Hapilon, 2 others surrender in Basilan
EDITORS' PICK
Get exciting deals and discounts when you download the new McDonald’s App
SM continues to send relief assistance to remote towns in Batangas
Palace: US Senate move also made Duterte junk VFA
Year of metal Rat: ‘Rooster’ Duterte warned of scandals
China expands lockdown against virus, fast-tracks hospital
‘A greener, cleaner tomorrow’: A how-to guide for Filipinos who want to help with today’s energy crisis
MOST READ
No time for revelry; Tagaytay instead plans for alert level 5
Palace: US Senate move also made Duterte junk VFA
Dina Bonnevie on Coney Reyes: We have forgiven each other
Countries with confirmed cases of coronavirus
Don't miss out on the latest news and information.