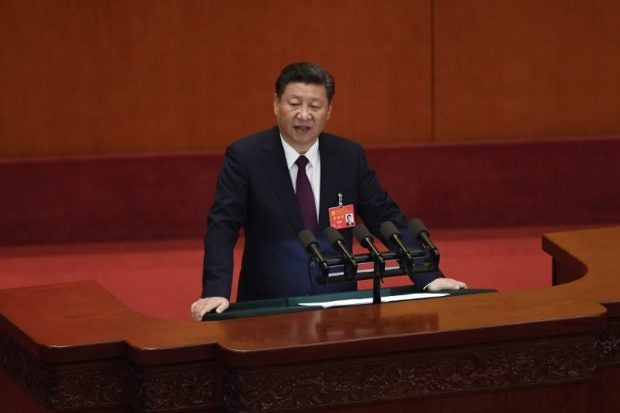 Chinese President Xi Jinping delivered a stern warning to Taiwan Wednesday, saying that Beijing has the will and power to thwart any attempts at independence.

Addressing a twice-a-decade gathering of the Communist Party in Beijing, Xi warned that China has “the resolve, the confidence, and the ability to defeat separatist attempts for Taiwan independence in any form.”

“We will never allow anyone, any organization, or any political party, at any time or in any form, to separate any part of Chinese territory from China,” he said.

Ties between Taiwan and China have turned increasingly frosty since the election of Tsai Ing-wen as president last year.

Beijing cut off official communication with her government shortly after it took office due to her refusal to publicly accept the “one China” concept.

Tsai also angered Beijing when she called Donald Trump to congratulate him on his US presidential election victory.

Under Taiwan’s previous government the two sides had stuck to the “1992 consensus,” in which they agree there is only one China without specifying which is its rightful representative.

In his speech, Xi held out an olive branch to the island’s leadership, offering to restore communication with Taiwan if its government readopts the understanding.

Then “no political party or group in Taiwan will have any difficulty conducting exchanges with the mainland,” he said.

The two sides split after a civil war in 1949, and while Taiwan sees itself as a sovereign nation, it has never formally declared independence.

Cross-strait tensions were further exacerbated by a highly unusual call from Tsai to congratulate then US President-elect Donald Trump.

Xi made no mention of independence movements in China’s semi-autonomous city Hong Kong.

“We will develop and strengthen the ranks of patriots who love both our country and their regions,” he said, adding that “patriots will be playing the principal role” in governing the metropolis, which operates under its own system of laws as part of the “One Country, Two Systems” policy.

Beijing has tightened control over the city’s affairs in response to high-profile calls for democracy that have increasingly turned to calls for self-determination or even full independence.