Cardinal Ricardo Vidal, champion of peace and voice of sobriety, dies at 86 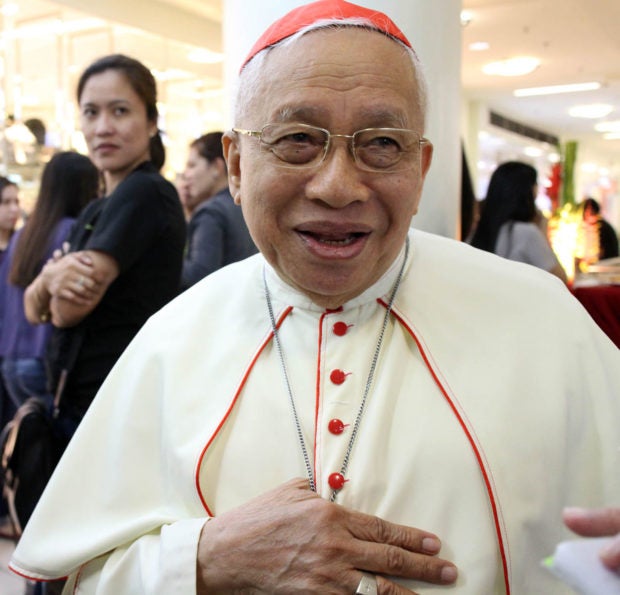 CEBU CITY — The Philippines has lost a cardinal, bringing to just three its remaining “princes of the Church.”

Cebu Archbishop Emeritus Ricardo Cardinal Vidal died at the Intensive Care Unit of the Perpetual Succour Hospital in Cebu City at 7:28 a.m. on Wednesday, surrounded by some priests and his closest confidants.

The 86-year-old cardinal died of septic shock, a condition when the blood pressure drops to a dangerously low level after a severe blood infection, said Msgr. Joseph Tan, the spokesperson of the Archdiocese of Cebu.

“It is with great sadness that I announce the death of Cardinal Vidal,” Tan said in telephone interview. “He has returned to the Father’s home at 7:28 a.m. today.”

“I ask the people to pray for his eternal repose,” he added. “For four days, he was in stable condition. But as it is, his heart may have given up due to his age.”

Cebu Archbishop Jose Palma and Auxiliary Bishop Dennis Villarojo, who served as Vidal’s private secretary for many years, were with Vidal when the cardinal breathed his last.

Vidal, who served as archbishop of Cebu for 29 years, from 1982 to 2011, lies in state at the Cebu Metropolitan Cathedral from Wednesday afternoon. His remains will be transferred to the Archdiocesan Shrine of San Pedro Calungsod at the Archbishop’s Residence compound over the weekend.

Tan said the funeral date has not been set, but Vidal’s body may be buried at the cathedral mausoleum where his predecessors had also been laid to rest.

Vidal, whose health declined since 2014 due to pneumonia, was rushed to the hospital Wednesday last week after having difficulty in breathing.

He was in a semi-comatose state and underwent dialysis after his kidneys weakened.

But around 6 a.m. on Wednesday, his blood pressure severely dropped due to blood infection.

Physicians tried to revive Vidal for about an hour but failed.

Juanito flew in to Cebu from Manila last week after learning that Vidal was confined at the hospital. But he was not able to talk to his brother who was already unconscious.

While they understood that Vidal would eventually die, Juanito said it was still painful to lose a loved one.

[I would have wanted to die ahead of him because he still has a lot to offer the people. He is needed by the people.]

Vidal is the fifth of six children while Juanito is the youngest.

Juanito thanked the Cebuanos for taking good care of Vidal.

Tan said Vidal would always be remembered as champion of peace who made himself available to others.

“He lent himself to others so he could be of help to them. He tried to be a peacemaker by mediating parties in conflict even to the point that he was (at times) misunderstood. But that is his way. He chose the way of truth,” the monsignor said, alluding to Vidal’s episcopal motto “Viam veritas elegi (I have chosen the way of truth).”

“First, he called for a diocesan synod in 1982 to create policies to transform the diocese,” he said. “And second, the Cardinal Vidal gave us the legacy of San Pedro Calungsod, and he started the legacy of Archbishop Teofilo Camomot.”

For over two decades, Vidal worked for the canonization of Calungod, a Visayan martyr, who eventually became one of the saints of the Catholic Church in 2012.

The cardinal also started the process for the beatification of the late Cebuano bishop, Teofilo Camomot, who was known for his extreme generosity and holiness.

De Aquino, the last private secretary of Vidal, said the cardinal was a true example of service and peace.

“He is a man of peace,” he said. “All he wanted was peace and reconciliation. If there was trouble in the Church or politics, he would always intervene. Cardinal Vidal’s death is one turning point in the history of the Catholic Church or even in the political or whole Philippine setting.”

A year after he was named cardinal by then Pope John Paul II, who’s now a saint, Vidal was elected president of Catholic Bishops’ Conference of the Philippines (CBCP) from 1986 to 1987.

He and the CBCP condemned the results of the February 1986 snap elections and called the people for a “non-violent struggle for justice” against the abuses of then President Ferdinand Marcos.

A CBCP report stated that Vidal led the rest of the Philippine bishops and made a joint declaration against the government and result of the snap election.

“He called the shots for the Edsa revolution,” said Dakay who served as Vidal’s secretary from 1984 to 2008.

Although he was instrumental in toppling down the regime of Marcos, Vidal flew to Hawaii to give the former president the Sacrament of Extreme Unction, a sacrament given to seriously ill person.

“He [Marcos] could no longer talk, so what I did was I instructed him to press my hands if he committed the sins that I mentioned. He followed,” Vidal said in an earlier interview.

In 1989, then President Corazon Aquino requested Vidal to convince Gen. Jose Comendador, then the Air Force chief who was sympathetic to the rebel forces fighting her government, to peacefully surrender.

Vidal repeatedly appealed to Comendador, who eventually gave up. Vidal’s intervention averted what could have been a bloody coup.

In 2001, Vidal also played a silent role in the EDSA 2 revolution.

While another uprising was done by the people, the cardinal privately advised then President Joseph Estrada to step down from office.

Estrada heeded the advice of his spiritual adviser.

Vidal, however, supported former President Gloria Macapagal-Arroyo’s move to grant a pardon to Estrada who was convicted of plunder in 2007.

On Dec. 7, 2010 the Senate recognized Vidal’s services and leadership through a resolution that read: “It is resolved by the Senate, to honor Ricardo Cardinal Vidal, Archbishop of Cebu, for his service to the people of Cebu, providing spiritual leadership and inspiration, helping the community avert or survive several crises and conflicts, often acting as a peacekeeper and giving the voice of moderation amid clashing views and interests in local and national issues.”

In an earlier interview, Vidal was very sickly when he was a seminarian in Mogpog, a third class municipality in Marinduque.

He was eventually sent home and was on the verge of not getting ordained as priest because he was sickly.

“I was so sad, and while I was on my way home, I passed by a church, and it was there where I intently prayed before the Blessed Sacrament,” he said.

His prayers were answered: His health improved.

Vidal was eventually ordained a priest on March 17, 1956 by the Bishop Alfredo Maria Aranda Obviar, who died on Oct. 1, 1978, and is now a candidate for sainthood.

Vidal was then assigned as assistant priest of a parish in his hometown in Mogpog and was a professor of the Our Lady of Mount Carmel Seminary in Sariaya, Quezon.

He was later named a bishop and appointed as coadjutor bishop of Malolos in 1971.

Reluctant to go to Cebu

In 1981, Vidal was sent to Cebu by then Pope John Paul II and was named a coadjutor archbishop with the right to succeed then Cebu Archbishop Julio Cardinal Rosales.

At that time, he didn’t want to go to Cebu since he didn’t speak the Cebuano language.

“I personally went to Pope John Paul II to express my request,” Vidal said. “But he told me: ‘I am also from Poland, and yet the Lord brought me to Rome.’ So I openly accepted my assignment in Cebu. I learned the language and eventually fell in love with my assignment. The people of Cebu are so good to me.”

When Rosales died in 1983, Vidal took over the Archdiocese of Cebu, the largest in the country with 400 diocesan priests, 200 others from various religious congregations, and about four million Catholics.

Although 75 was supposed to be the mandatory retirement age, Vidal waited for more than four years for the Vatican to approve his request to retire.

Instead of going back to Marinduque, Vidal chose to spend his retirement in Cebu. He stayed at a retirement house at the Sto. Niño Village in Banilad, Cebu City.

Although he had already retired, Vidal’s advice was still sought after by Church and political leaders in the country.

In July 2016, Vidal went to Malacañang and met with President Rodrigo Duterte, hoping to bridge the gap between Catholic Church bishops and the new administration.

Duterte earlier criticized the Catholic Church for alleged sins committed by the clergy describing the Church, at one point, as the “most hypocritical institution.”

When he arrived at the Music Room of Malacañang, Duterte bowed his head and kissed the prelate’s hand, and even cracked jokes with Vidal.

During their conversation, Vidal said he promised to pray for the President.