Duterte to jeepney drivers: Modernize or else… 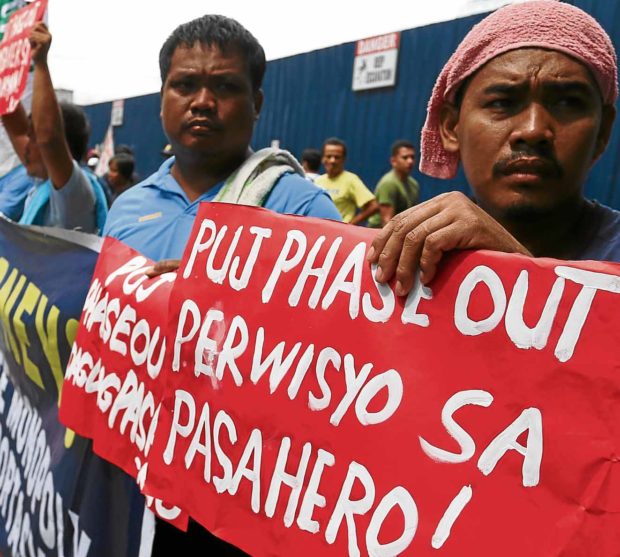 DAY 2 PROTEST Jeepney drivers belonging to Piston continued their second day of a nationwide transport strike against
government plans to phase out the jeepneys with a march along Aurora Boulevard in Cubao, Quezon City. —EDWIN BACASMAS

The days of the iconic jeepneys are numbered sooner than their drivers and operators expect.

All public utility jeepneys (PUJs) will be phased out next year and those who defy the phaseout will be arrested and their vehicles impounded, President Rodrigo Duterte on Tuesday said in Marawi City.

Later, in Camarines Sur, Mr. Duterte said: “Jan. 1. If you can’t modernize that, leave. You’re poor? Son of a bitch, go ahead, suffer in poverty and hunger, I don’t care.”

Then, speaking to soldiers in Marawi City, Mr. Duterte said the current type of PUJ was “poisoning the people,” especially the poor, and blasted Piston (Pinagkaisang Samahan ng mga Tsuper at Opereytor Nationwide) and other groups for rallying people to object to the jeepney modernization program.

Piston staged a nationwide transport strike on Oct. 16 and 17 to oppose the planned phaseout of jeepneys.

The proposed modernization program will displace 270,000 jeepneys nationwide and around 650,000 drivers, according to the Crispin B. Beltran Research Center.

Piston president George San Mateo changed his tune, saying his group was not opposed to the modernization program but only to the “corporatization” of the public utility vehicle (PUV) industry, as only big companies could afford the required fleet of at least 10 units of new e-jeeps.

San Mateo said jeepney drivers and operators would incur debts because the new jeeps could cost up to P1.6 million.

But Mr. Duterte said small operators did not have to worry about shelling out big cash. “If you cannot afford it, I am OK even if you just pay P1 per day,” he said.

Also for the second day, Malacañang suspended work in the government and classes in schools at all levels nationwide.

Presidential Communications Secretary Martin Andanar said work and classes were suspended on Tuesday because government workers and students could get wet in the rain and fall ill. But the rains didn’t come.

Mr. Duterte said that despite groups like Piston going on strike once in a while and “putting everybody in a very uncomfortable situation,” he was bent on implementing the program.

It was the PUJ owners who declined to fix their engines in the first place and let their vehicles spew poison, he said.

“You do not want to fix your engines, which were used already but had been overhauled. Those are really machines that should be phased out. You see, they are smoke belchers and our poor fellow Filipinos who do not have cars, aircon suck everything,” the President said.

“This is what I will do, either you modernize next year, sell your jeeps to the junkyards. Next year, I don’t want to see any single PUJ [on the streets] because if I see one, you will be arrested. Do not resist anymore because I am telling the truth, this is the law,” he added.

Mr. Duterte said no one would be allowed to “get away.”

“You always say you are poor but Piston, (Kilusang) Mayo Uno and Bayan are riding on you,” he said.

The LTFRB said anew that the strike barely made an impact on the country’s transport services.

But Piston said it again paralyzed jeepney transportation in Pampanga province on Tuesday.

More than 7,000 drivers capped their two-day strike with a march and rally in the City of San Fernando.

Allan Bonifacio, Piston Central Luzon coordinator, noted that the protest at the Pampanga capital was “unprecedented” because previous mass actions against oil price increases and the deregulation of the oil industry were sustained for only a day.

His group claimed the strike on Monday paralyzed 98 percent of jeepney routes in Pampanga, except at Angeles City.

Senen Manalastas, Piston Pampanga coordinator, said operators and drivers of jeepneys joined the strike to defend their sources of income.

Striking drivers were expected to resume plying their routes at 5 p.m.

But the strike and the cancelation of classes and work on Monday and Tuesday affected drivers who did not participate in the protest actions.

In Pangasinan province, jeepney drivers said they lost at least 25 percent of their daily earnings.