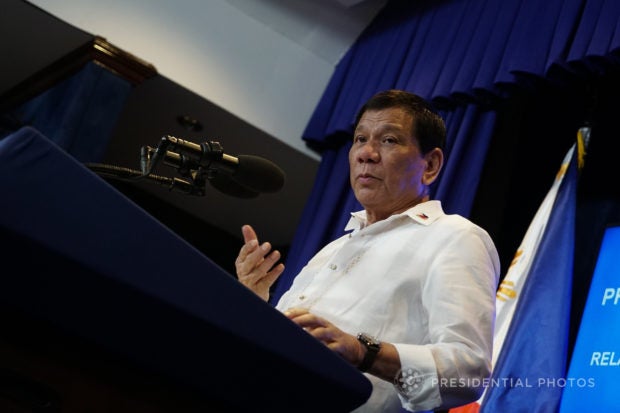 President Rodrigo Roa Duterte, in his speech during the relaunching of the Malacañang Press Briefing Room (MPBR) at the New Executive Building (NEB) on October 12, 2017, declares that the Philippine Drug Enforcement Agency will be the sole agency that will carry out anti-illegal drug operations in the country. KING RODRIGUEZ/PRESIDENTIAL PHOTO

President Rodrigo Duterte warned transport groups that the government would proceed with the modernization of public utility jeepneys amid opposition from some sectors.

Duterte urged drivers and operators to modernize their jeepneys by the end of 2017.

“Kaya, I’ll give you until the end of the month or until the end of the year. Sumunod kayo because January 1 [2018], pag may makita ako diyan mga jeep ninyo, walang, di narehistro, luma, guguyurin ko yan sa harap ninyo. If you want, gusto ninyo ng gulo, marami man akong pulis,” he said in a speech in Pili, Camarines Sur.

The President said old jeepneys emit too much carbon dioxide and put the health of Filipinos at risk.

“Like for example itong modernization, you know the machines, the engines that run itong mga PUJ are about 20 to 25 years old. We got them from the other countries, yung reconditioned ipinagbibili dito and it have been pumping in so much carbon dioxide into the air, including the factories,” he said.

“And here comes Piston and the rest of the Left, sinasakyan nila, make it a big deal. So ako naman, sabi ko ganoon, sige e di mag-demonstrate kayo, walang ano sa ’kin even if you do that twice or thrice a month  sa akin,” he said.

“Itong Karapatan, itong KMU, itong Piston, they are just the legal fronts of the Communist Party of the Philippines. Kaya nga CPP, NDF, pati the NPA, the New People’s Army. It’s a one big conspiracy but they are at the same time, all of them, are committing right now  rebellion,” he said.

“Like for example, itong modernization. You know, the machines, the engines that run itong mga PUJ are about 20 to 25 years old. We got them from the other countries yung preconditioned ipinagbibili dito and we have been pumping so much fumes and carbon dioxide including the factories. But I [kung] umuwi ako ng Malacañang usually at night. Lumilipad talaga ako. Nag-take off ako ng Marawi noon hatinggabi. Nakikita ko talaga ang fog. I am not referring to the fog created by the moisture of nature but yung fog na created by exhaust.

Piston is protesting the PUV modernization program aimed at phasing out old PUVs, while the government plans to replace the jeepneys with “eco-friendly” PUVs.