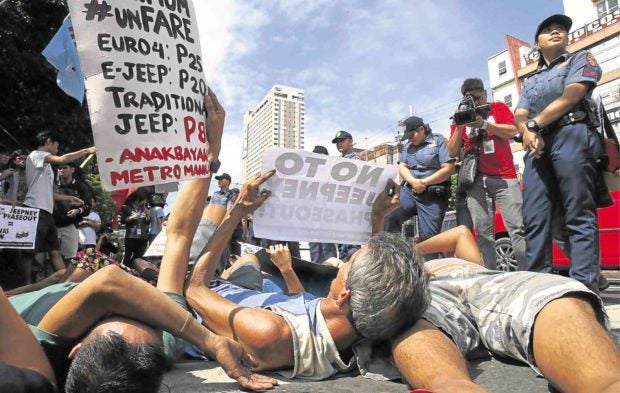 DIE-IN Jeepney drivers and their supporters stage a die-in along a busy Manila road to signal the start of a two-day nationwide strike to protest the government’s phaseout of old jeepneys. —BULLIT MARQUEZ / AP

In a speech in Pili, Camarines Sur, Duterte said Piston, together with human rights group “Karapatan” and the labor group Kilusang Mayo Uno (KMU), was in conspiracy with the communist rebels.

“Itong Karapatan, itong KMU, itong Piston, they are just the legal fronts of the Communist Party of the Philippines. Kaya nga CPP, NDF, pati the NPA, the New People’s Army. It’s a one big conspiracy but they are at the same time, all of them, are committing right now  rebellion,” he said.

“It’s a one big conspiracy, mayroon sila, kita mo yung Piston may star pa ng, that’s the logo of the communists,” he added.

The President’s attacks against Piston were made amid the group’s nationwide transport strike.

Piston is protesting the PUV modernization program aimed at phasing out old PUVs, while the government plans to replace the jeepneys with “eco-friendly” PUVs.

Duterte said he was giving drivers and operators until December 2017 to modernize their jeepneys.

Meanwhile, Karapatan and KMU have been critical of the policies of the Duterte administration.