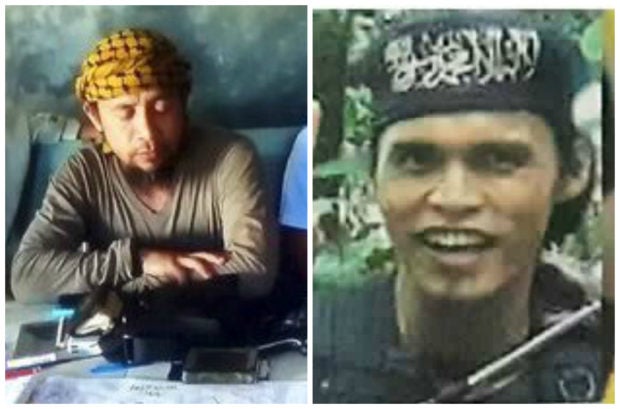 MARAWI CITY — Pursued by government troops during a dawn raid on Monday, terror leaders Isnilon Hapilon and Omar Maute tried to conceal themselves among 30 hostages their group was holding as they attempted to get out of a building in the main battle zone for the wharf.

But the thermal imaging technology of a “remote control weapon system” in the military’s armored personnel carrier (APC) allowed soldiers to shoot Maute in the head and Hapilon in the chest, said 1st Lt. Ronilo Vender, platoon leader of Combat Team Charlie of Task Group Bakal.

It was pitch dark at 3 a.m., and only through the thermal scanner that government troops were able to detect the movement.

While Maute died instantly, Hapilon, a leader of the Abu Sayyaf in Basilan province, managed to crawl and tried to seek a safe location. Vender said Hapilon also attempted to fire back at the troops.

“Nakapaputok pa siya kahit may tama na (He managed to shoot even though he was wounded),” Vender said.

Hapilon, while already on the ground, tried to grab a child from a woman hostage so he could use the kid as a shield. The woman, military reports said, was able to run away with her child.

Brig. Gen. Fel Budiongan, deputy commander of the Mechanized Infantry Division, credited the thermal scanner weapon used in the assault against the two terrorist leaders for the success of their operation.

“Without these assets, the battle would have dragged on,” Budiongan said.

The weapon system features night vision capability, allowing troops to track down targets. The technology, used by armies around the world, is among the latest acquisitions by the Armed Forces of the Philippines, Budiongan said.

“It is a very accurate weapon system,” he added.

Military officials said the AFP would give Hapilon and Maute a decent burial.

“Their bodies are with our troops in the front line. They will be buried according to Muslim rites,” Gen. Eduardo Año, AFP chief of staff, told reporters here on Monday.

But Año said the military would not disclose the burial place “because we don’t want this to become a symbol for martyrdom [that] will be used by their sympathizers and supporters to advance their interest.”

The burial rituals, which normally take place immediately after a Muslim’s death, include bathing the body, enshrouding it in a white cotton or linen cloth and reciting funeral prayer, before burying the remains.

“We considered the Maute brothers and Hapilon as the centers of gravity. When we say center, it’s their strength that pull the whole organization and their supporters. Now that they are gone, the impact is a big debacle in the IS (Islamic State) that they are trying to put up in Mindanao,” Año said.

“They cannot find any leader immediately. In fact, what will happen, since they are leaderless, is a lot of their followers will abandon their movement,” he added.

But according to Año, the military “will not just sit and relax.”

“It will even inspire the Armed Forces and the police and other law enforcement agencies to go after the remaining militants and finish them,” Año said.

“I think all cities in Mindanao are vulnerable to that because [terror groups] don’t need a big force to create trouble,” Lorenzana said. “What we need to do is to be vigilant and nothing of this sort will happen again.” /jpv /pdi