After liberation, rehab next for Marawi—Palace 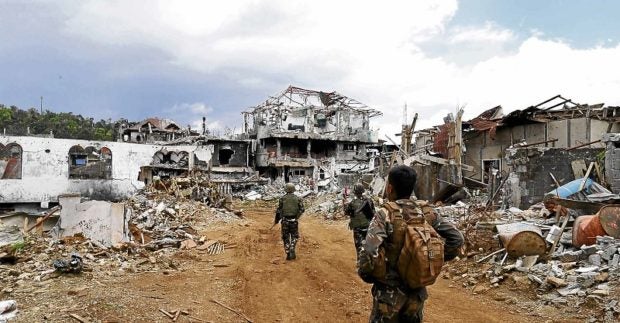 “The declaration of PRRD marks the beginning of the recovery, reconstruction and rehabilitation of Marawi,” Presidential Spokesperson Ernesto Abella said in a statement.
READ: Duterte: Marawi City ‘liberated from terrorists’

Abella, however, said it is not yet advisable for residents to return to the besieged city.

“Our ground commanders will determine if it is safe for residents to return to the city as there may still be traps and unexploded ordnance in some areas,” he said. “We will defer to their assessment and await their recommendation.”

The Palace official called on the public to unite as the government vowed to seriously rehabilitate the city.
READ: Gov’t readying Marawi rehab plan

“The damage to the Islamic city’s infrastructure and private properties and the displacement of thousands of residents require the government’s unified and comprehensive effort; thus, we call on all our citizens to come together to move our country forward towards a peaceful, prosperous and secure future,” he said.

“This is the time to channel our time and harness our energies to restore normalcy in the war-torn city and serve people’s aspirations for a comfortable life for all,” he added.

Duterte announced the liberation of Marawi City during his visit on Tuesday.

“Ladies and gentlemen, I hereby declare Marawi City liberated from the terrorist influence. That marks the beginning of rehabilitation,” he said. /jpv