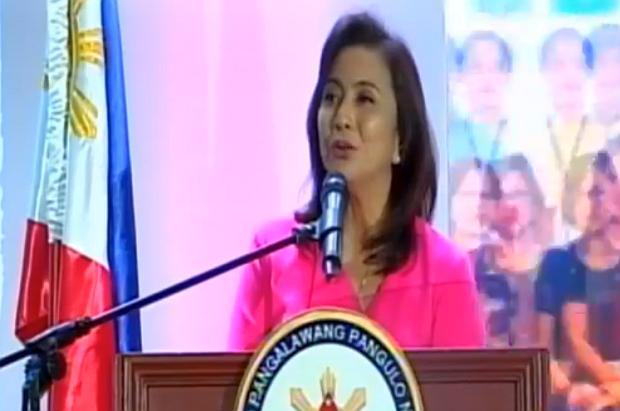 Vice President Leni Robredo speaks at the first anniversary commemoration of her Angat Buhay program at the SMX Convention Center in Pasay on Tuesday, Oct. 17, 2017. (Photo from a video in her Facebook account)

Vice President Leni Robredo decried on Tuesday as “baseless” the allegations of a conspiracy by the “yellows” to destabilize the administration of President Rodrigo Duterte, saying that his threats of forming a “revolutionary government” would only stoke fear among the public.

“There’s no basis to say we’re part of destabilization,” Robredo told reporters on the sidelines of the first anniversary commemoration of her Angat Buhay antipoverty program at the SMX Convention Center in Pasay.

“I hope those [who say that] are not irresponsible in saying that,” she added. “If there are such accusations, they should be a proper basis. These many accusations, I think they don’t help… [the threat] to declare a revolutionary government, because they create fear among the people.”

Robredo, who also chairs the former ruling party, the Liberal Party, also assured Duterte that “when we criticize, it does not mean we want the government not to succeed.”

Her remarks came after Duterte, in an interview aired on state television PTV on Oct. 13, threatened to form a “revolutionary government” if ever “your destabilization is worsening and it is becoming chaotic.”

Duterte said this “revolutionary government” would be similar to what President Corazon Aquino created shortly after the People Power Revolution in Feburary 1986.

Last Oct. 12, Duterte said the “yellows and reds,” referring to the pro-Aquino and left-wing groups, should just unite since they shared “the same ideological whatever” of wanting to “kick me out” of office.

Last Sunday, his daughter, Davao City Mayor Sara Duterte, claimed that “the threat of destabilization is as real as terrorism” if alleged intelligence reports were to go by. She also denied her father was just being paranoid.

But Magdalo party-list Rep. Gary Alejano, who unsuccessfully tried to seek Duterte’s impeachment in May, maintained that “the destabilization narrative… is a fruit of their imagination.”

Alejano said all this talk of destabilization was just a “mere diversion” from the issue of the President being dared to not sign a waiver so that his family’s bank accounts could be investigated to determine if they had “hidden wealth.”

“However, in spite of whatever diversionary tactic that her family will use, it will not erase the fact that they have not faced the issues hurled against them,” Alejano said. “As the first family, they should present the best there is of a Filipino. They should embody our ideals and aspirations rather than the opposite of it.”

Government officials have been floating the destabilization angle recently, some of them even linking as part of the plot to unseat Duterte the nationwide jeepney strike to protest the modernization program of public utility vehicles. /atm