Robredo to Bato: I don’t have mascots, standees to justify Palace ambition 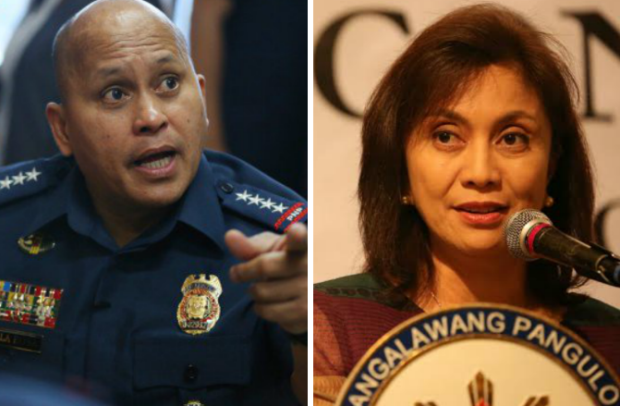 “Presidential ambition? I don’t even have mascots or standees in malls.”

Vice President Leni Robredo has this to say on Tuesday as she responded to Philippine National Police (PNP) chief Director General Ronald “Bato” Dela Rosa’s call for her to set aside her supposed presidential ambition and just support President Rodrigo Duterte.

(Actually, I was laughing at the statement. My joke was: maybe the general will know that I have ambition if they start to see I have mascot and standee inside mall.)

The Vice President was obviously referring to Dela Rosa’s standees and mascots, which could be seen in PNP events and his standees placed in different public places.

Robredo said she would rather spend her time for work rather than think about the upcoming elections.

(We need a lot of time to work for us to think about the next elections.)

Dela Rosa, attending the same forum with Robredo on Tuesday, advised the Vice President to support the President so he could “accomplish his plans for the country.”

“Sana tulungan na lang niya ang Presidente (I wish she just helps the President). She will have her time pagkatapos nito,”

Dela Rosa said this when asked to give a message to Robredo. The two took a picture together before Robredo left the Kamuning Bakery’s “World Pandesal Day” event.

(If she wanted to be president, we can test her but for now let the present administration finish its term so that the President can accomplish his plans.)

Allies of President Duterte earlier hit Robredo for criticizing Duterte’s brutal drug war, which had killed thousands of Filipinos in a year.

Dela Rosa earlier said he was open to any option, including running for a Senate seat, when he retires from police service in January next year. /jpv