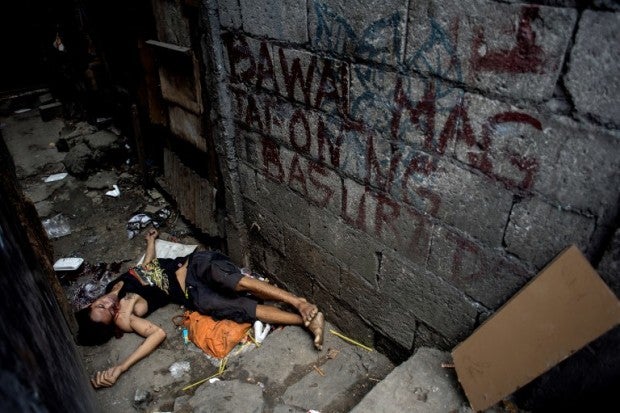 The body of Valien Mendoza, a suspected drug dealer, gunned down by unidentified assailants in Manila in this photo taken on March 7, 2017. AFP

Majority of Filipinos believe that there are extrajudicial killings (EJKs) happening in the Duterte administration’s war on drugs but still support the administration’s campaign against illegal narcotics,  a recent Pulse Asia survey released on Monday revealed.

The survey, conducted from September 24 to 30,  2017,  among 1,200 respondents, showed that 73 percent of the surveyed respondents believed that EJKs exist in the government’s brutal crackdown on illegal drugs.  This was higher than the 67 percent in June 2017.

The respondents were asked, “Do you believe or not believe that extrajudicial killings or EJK are happening in the implementation of the campaign against illegal drugs?”

In all socioeconomic classes, majority of the respondents also believed that EJKs existed 77 perent for class ABC, 72 for D, and 70 percent for E.

Only 20 percent of the respondents said they do not believe that EJKs existed while 7 percent refused to answer.

On the other hand, 88 percent support the government’s war on drugs, which is also echoed across all geographic areas and in all socioeconomic classes.

The question asked was, “Do you support or not support the campaign against illegal drugs of the administration of President Duterte?”

Also 76 percent said they were worried on what happened to delos Santos.

The survey also asked the respondents on “what should the leaders of the Catholic Church do about the campaign against illegal drugs?”

A small majority of Filipinos or 58 percent would like Church leaders help the rehabilitation of drug addicts. This is the preferred action of most respondents in all geographic areas and in all socioeconomic classes.

Around half of the respondents or 46 percent wanted Church leaders to observe or monitor the camapaign against illegal drugs while 40 percent said Church leaders should release statement expressing concern about the deaths associated with the campaign. 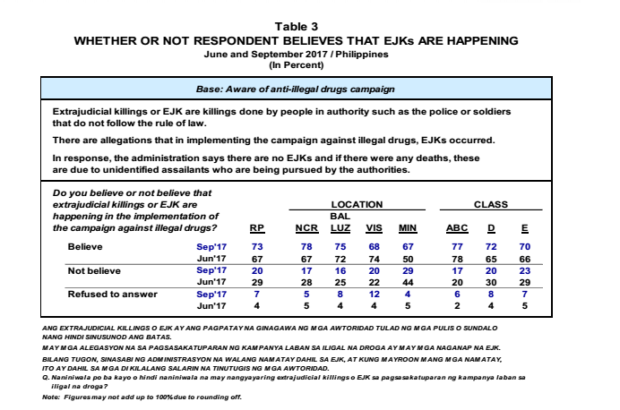