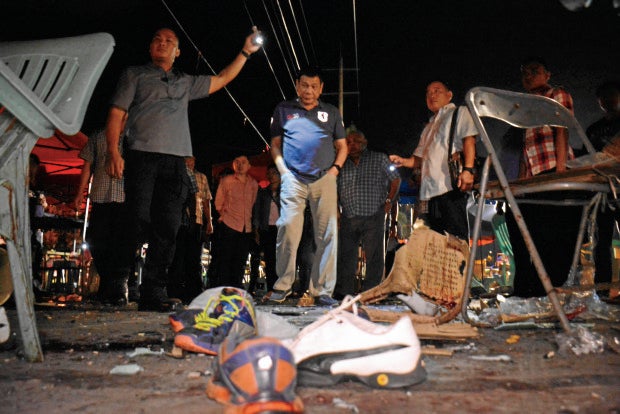 President Rodrigo Duterte visits the night market on Roxas Avenue in Davao City where 14 people were killed and 68 others injured after an explosion on Sept. 2, 2016, tore through what Davaoeños call their happy place. (Photo from the Presidential Photographers Division)

COTABATO CITY – One of the suspects in the 2016 night market bombing in Davao City surrendered to the Cotabato City Police Office on Sunday.

“He denied involvement in the Davao bombing and voluntarily surrendered to clear his name,” Octavio told the Inquirer by phone.

Chenikandiyil, alias Boy, is now detained at the Criminal Investigation and Detection Group in the Autonomous Region in Muslim Mindanao (CIDG-ARMM).

Octavio said Chenikandiyil was included in the Department of National Defense Arrest Order No. 2 that Defense Secretary Delfin Lorenzana issued following the declaration of martial law in Mindanao since the start of the Marawi siege last Oct. 23.

Chenikandiyil was among the four other bombing suspects arrested on Oct. 27, 2016 in separate raids by CIDG-ARMM in Barangay Rosary Heights 7, Cotabato City, and in Datu Odin Sinsuat, Maguindanao.

They were then turned over to the Davao City Police Office.

But the Davao Regional Trial Court Branch 14 ordered the Davao police on Nov. 11, 2016 to release Chenikandiyil after granting the petition for a writ of habeas corpus filed by his wife.

In special proceeding last, Presiding Judge Jill Jaugan-Lo heard the petition of the Allysanor Chenikandiyil against the police and the Davao Region office of the CIDG.

Through lawyer Donasco, she stressed that her husband’s continued detention was unjustified since no formal charges had been filed against him since his arrest in Cotabato City up to the time he was transferred to CIDG Davao.

She said her husband’s detention had exceeded the 36 hours allowed by the Revised Penal Code.

If a case had been filed, she received no notice of it. So his continued detention was not justified since no inquest proceeding was ever conducted.

At least 14 people were killed in the Sept. 2, 2016 bombing in the Davao night market on Roxas Boulevard. More than 50 others were injured. /atm