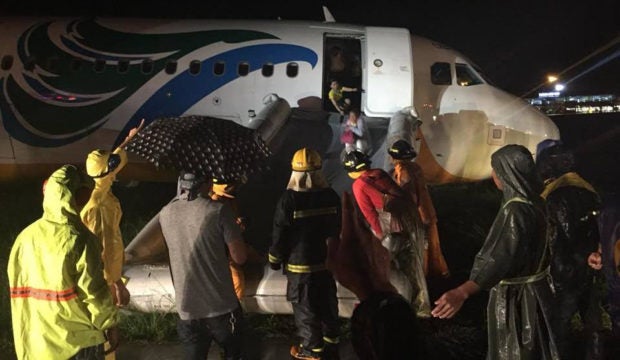 Passengers of Cebu Pacific Flight 5J 461 slide down through an emergency exit on a chute after the plane overshoots the runway of the Iloilo International Airport on Friday night, Oct. 13, 2017. (Photo from the Facebook page of LOUI LATOZA)

ILOILO CITY—Bad weather is hampering efforts to remove the damaged Cebu Pacific plane at the Iloilo International Airport, according to the airline on Sunday morning.

The removal of the Airbus A320 plane is being undertaken by technical experts of the Civil Aviation Authority of the Philippines (CAAP), the Manila International Airport Authority, and the airline’s onsite team, it said in a statement.

The airport was closed down on Friday evening after Cebu Pacific Flight FJ 461 with 180 passengers and six crew members on board swerved and overshot Runway 20 after landing.

Operations were expected to resume 7 p.m. on Sunday, according to a CAAP announcement.

Cebu Pacific said in its statement that the baggage of the passengers were being delivered to them.

Passengers for cancelled flights to and from Iloilo were being transported through flights at the Roxas City airport in Capiz, about a two and half-hour travel by land from Iloilo. /je