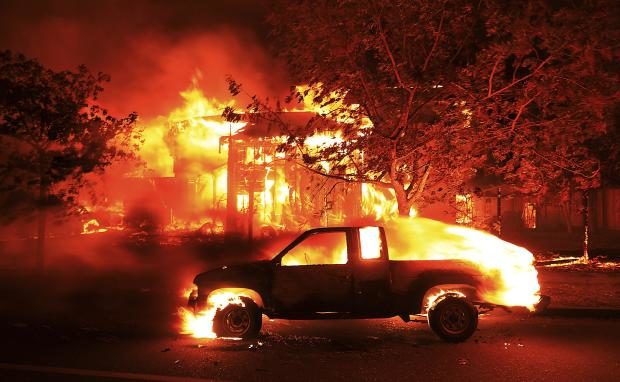 Coffey Park homes burn early Monday Oct. 9, 2017, in Santa Rosa, California. More than a dozen wildfires whipped by powerful winds been burning though California wine country. The flames have destroyed at least 1,500 homes and businesses and sent thousands of people fleeing. (Photo by KENT PORTER / The Press Democrat via AP)

SONOMA, California — They fled in fear nearly a week ago. Now they’re ready to go back.

While wildfires are still burning powerfully in parts of Northern California, some of the tens of thousands of evacuees are getting antsy to return to homes that aren’t under immediate threat. Others want to see if they still have homes to return to.

But authorities are staying cautious in the face of blazes that have now killed at least 40 people and destroyed at least 5,700 homes.

“We’re on pins and needles,” Travis Oglesby, who evacuated from his home in Santa Rosa, said to Sonoma County Sheriff Robert Giordano on Saturday. “We’re hearing about looting.”

Although some evacuees were returning home in Mendocino County, the latest estimates were that about 100,000 people were under evacuation orders as the fires burned for a sixth day.

Plans were in the works to reopen communities, but they were not ready to be put into effect, said Dave Teter, a deputy director with the California Department of Forestry and Fire Protection.

Douglas and Marian Taylor stood outside their apartment complex Saturday in Santa Rosa with their two dogs and a sign that said “End evacuation now.”

Their building was unharmed at the edge of the evacuation zone with a police barricade set up across the street. The couple said they are spending about $300 per day to rent a motel and eat out, and they want to return home because the fire does not appear to threaten their home.

At an evacuation center at the fairgrounds in the Sonoma County city of Petaluma, volunteers sorted through mounds of donated baby wipes, diapers, pillows, shoes and clothing.

Randy Chiado and his wife, Barbara, evacuated Monday from the Oakmont section of Santa Rosa. They stayed for several days with a friend in Santa Rosa but left Saturday when flames approached again and sought refuge at the fairgrounds.

Life away from home has been difficult and dangerous. Randy Chiado said a man who may have suspected he was a looter tried to punch him through his car window and yelled for a friend to get a gun when the Chiados turned onto a residential street. He said he was able to push the man off and drive away.

The couple planned to spend the night with other evacuees in a room set up with cots. “It’s like jail,” he said.

Hundreds of people remain unaccounted for, though officials think they’ll locate most of them alive.

Most of the deceased are believed to have died late on Oct. 8 or early Oct. 9, when the fires exploded and took people by surprise in the dead of night. Most of the victims were elderly, though they ranged in age from 14 to 100.

“It’s a horror that no one could have imagined,” Gov. Jerry Brown said, after driving past hundreds of “totally destroyed” homes with Sens. Dianne Feinstein and Kamala Harris.

From the sky, large subdivisions that burned to the ground looked like black and white photos. Each neatly outlined lot is full of ashen rubble. Cars are burned a darker gray. Trees still standing are charred black. Only streets look unscathed.

Brown, 79, and Feinstein, 84, said the fires were the worst of their lifetimes. The two veteran politicians reminded people that the blazes remain a threat and that people need to leave their homes when told to go.

No causes have been determined for the fires, though power lines downed by winds are seen as a possibility.

In all, 17 large fires still burned across the northern part of the state, with more than 10,000 firefighters attacking the flames using air tankers, helicopters and more than 1,000 fire engines.

Signs posted in Sonoma thanked the firefighters. One declared them “heroes among us.”