The farmer-activist was called ‘a pusher, an addict,’ by his abductors, his mother Edita recalls
By: Jhesset O. Enano - Reporter / @JhessetEnanoINQ
Philippine Daily Inquirer / 05:45 AM October 15, 2017 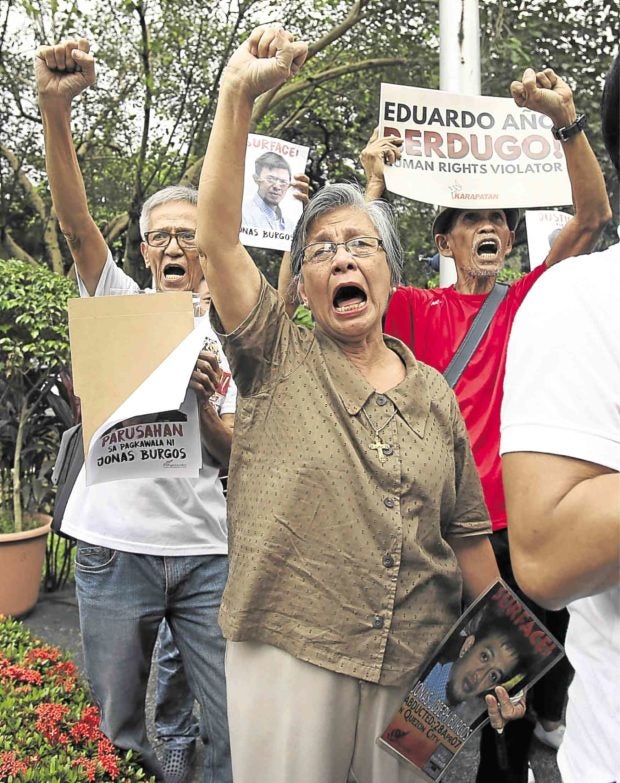 “My prayer is that this battle, this struggle, would end before I die. I want it resolved in any way that the Lord wishes. Maybe tomorrow he’s going to come knocking on my gate”. Edita Burgos, 74. Photo by Niño Jesus Orbeta / Philippine Daily Inquirer

The night before the court released its verdict on the case of her son, Edita Burgos could not get a wink of sleep.

It has been 10 years since the disappearance of Jonas Joseph Burgos, then 37 years old. Under three different presidencies, Edita has led what remains a fruitless search for her child who was taken by unidentified men at a Quezon City mall in 2007.

On Thursday, a Quezon City judge acquitted Army Maj. Harry Baliaga, the only person to be put on trial for the abduction, which the Burgoses suspected to have been masterminded by the military to silence Jonas, a farmer-activist.

Baliaga was cleared of the charge of arbitrary detention. For Edita, however, the legal setback was only a delay in her son’s journey home.

At 74, Edita could not just let the flame of hope die out. “I was awake most of the time [that night] offering a prayer that Jonas is well, that he is not hurt or tortured,” she said in an interview with the Inquirer. “I was praying for strength to accept God’s will. Maybe it’s His will for us not to see him yet.”

A devout Catholic, Edita remained strong in her faith even with the circumstances stacked against her. She had long accepted her role as the voice of families seeking justice for the desaparecidos.

“At the time Jonas was taken, I was 64. My hair had already turned white in this search,” she said, smiling even as her eyes welled up with tears.

At the center of one of the most celebrated cases of disappearances in the post-Marcos period, Jonas was the son of the late journalist and press freedom fighter, Jose Burgos Jr., who was jailed during the martial law years for hard-hitting reportage that riled the dictatorship.

Edita recalled that on the night of April 28, 2007, she already had a bad feeling about Jonas when he failed to return to their Tandang Sora residence.

Through the family’s relentless efforts and an investigation led by the Commission on Human Rights, details soon emerged of her son’s abduction from Hapag Kainan restaurant at Ever Gotesco Mall — thanks to three key witnesses.

They include a male restaurant busboy, a female management trainee and a male security guard.

A particular detail stood out — one that seems to find resonance today amid the Duterte administration’s bloody war on drugs.

As Jonas was enjoying a lunch of rice and his favorite pork sinigang, Edita said, “four men and a woman grabbed him from his table, including Baliaga who allegedly gave orders.”

“The female witness (the management trainee) intervened and asked the abductors: Where are you taking my customer?”

In statements made before the trial, the female witness recalled having sleepless nights because she could not forget how Jonas struggled and shouted “I’m an activist! I’m an activist!” as he was being dragged out of the restaurant.

The mall security guard, meanwhile, recalled seeing Jonas being whisked away in a Toyota Revo with plate number TAB 194. The vehicle was later traced to the 56th Infantry Battalion Camp in Norzagaray, Bulacan province, where Baliaga was previously assigned.

A Court of Appeals decision in March 2013 ruled that Baliaga, then a lieutenant, was responsible for Jonas’ disappearance.

But in the arbitrary detention case filed by the Burgoses against the military officer in Quezon City Regional Trial Court Branch 42, Judge Alfonso Ruiz III ruled that the prosecution failed to prove his identity in court as the one who gave orders during the abduction.

This was because the three key people who could place Baliaga at the crime scene could no longer be found.   The prosecutors then had to rely on other witnesses, whose testimonies were later dismissed by the court as “hearsay in nature.”

But Edita could not find it in herself to blame them. The long legal battle she had waged, she said, “gave me more opportunities to forgive.”

“They have families. They have their reasons for hiding,” she said of the three witnesses. “But I hope they also thought that my son’s life was in their hands.”

For JL Burgos, Jonas’ younger brother, the four-year RTC trial “has been an emotional roller-coaster ride.”

As the Oct. 12 decision was being read, JL stepped out of the courtroom upon hearing the words: “The prosecution had failed to prove the guilt of the accused.” He and Edita would later collapse in each other’s arms.

Edita said Jonas continued to be a presence in the household. His 47th birthday was celebrated in March, complete with presents which his mother is now reserving for his return.

“What I miss the most is that noise he makes; he’s so talkative,” she said of her son, who took up Philosophy before developing an interest in farming and a heart for farmers. This passion took him to many places across the country, but he would always return as the same jolly Jonas, bearing pasalubong for the entire family.

Jonas has a wife and a daughter, now 12 years old. For their protection, the family chose to keep them out of the limelight, Edita said. “His daughter knows what happened to her Tati, and she waits for him every day.”

Their search has taken the Burgoses to various places where “sightings” of Jonas were reported—and even to Quiapo, to consult spiritual mediums or fortune tellers.

Edita had dreamt of Jonas only once, in the fifth year of his disappearance. Even in that realm, her vision was grim.

“He was beat up, and he was in a warehouse that had a single sofa, and I can hear the sound of a helicopter,” she said. “He was reaching for my hand and asking for help. I could not reach him, I could not help him.”

“My prayer now is that this battle, this struggle, would end before I die,” she said. “I don’t want my other children to inherit this task. I want it resolved in any way that the Lord wishes.”

“If God wills it, maybe tomorrow he’s going to come knocking on my gate,” Edita said. “And then he will ask me: Moms, what’s for lunch?”