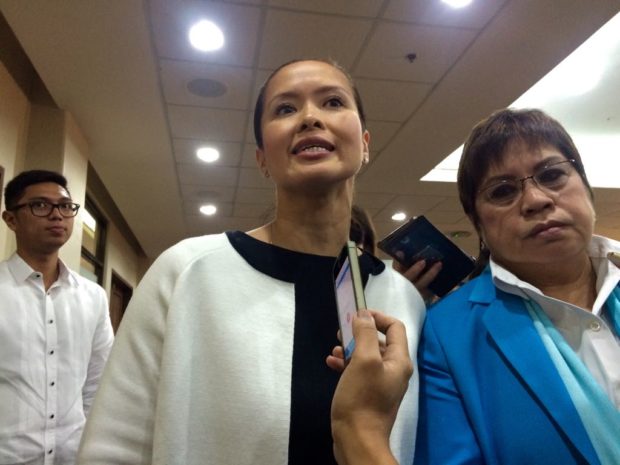 In a statement, Divina said Bautista and Kapunan were liable for 16 counts of libel under the Cybercrime Prevention Act.

The case stemmed from the duo’s statement that publicized the disbarment complaint they had filed against him and 20 other lawyers, “many of whom had barely started practicing.”

Divina said the allegations were “filled with false and highly defamatory allegations.”

“In flagrant disregard of the confidential nature of disbarment proceedings, they summoned and narrated to the media the defamatory allegations in the complaint,” the statement read.

“Therefore, even if the said patently baseless complaint is now dismissed, they have already irreversibly caused damage to the reputation of complainants.  For such, there can be no sufficient monetary recompense,” the statement said.

Divina said Kapunan and Bautista also displayed copies of the document to journalists after filing the complaint in the Supreme Court.

Divina said elements of libel and cyberlibel are “present in this particular case” because the duo’s statement before the public was “defamatory.”

“Libel is committed if the words are calculated to induce the hearers to suppose and understand that the person or persons against whom they were uttered were guilty of certain offenses or are sufficient to impeach the honesty, virtue or reputation or to hold the person or persons up to public ridicule,” Divina said.

Divina is demanding P50 million as moral damages for “the grossly unjustified and grossly malicious imputations made by respondents which have tainted complainants’ reputations for competence, honesty and dedication to work.”

Lawyers of his firm are also demanding P10 million as exemplary damages.

Meanwhile, Divina reiterated that he did not know slain law student Horacio “Atio” Castillo III personally and that he has “done everything in my power to prevent hazing and any form of violence, which are against my fundamentally held beliefs.”

In a separate statement, Divina said allegations regarding his involvement in the Castillo hazing case have spiraled for the past two weeks.

“The latest mutation of the story is that I purportedly met Atio at my law office on Sept. 12, therefore, I must have known about the hazing and all my other acts are part of efforts to obstruct justice,” he said.

He said his conscience is clear that he has not “transgressed the law or breached any moral obligation.”