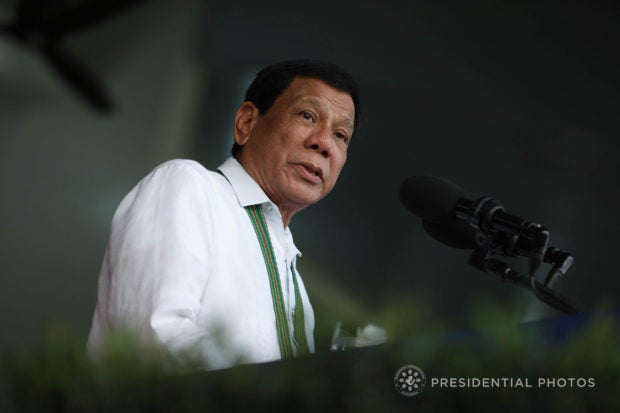 The performance and trust ratings of President Duterte barely changed in September, with eight of 10 Filipinos approving of his work and trusting him, according to the latest Pulse Asia survey report released on Friday.

The third quarter Pulse Asia survey from Sept. 24-30 showed Mr. Duterte’s overall approval at 80 percent and trust ratings at 80 percent. In June, his approval score was at 82 percent and his trust score at 81 percent.

The President enjoyed majority approval (72 to 92 percent) and trust (72 to 93 percent) scores across all geographic areas and all socioeconomic classes with 75 to 86 percent approving of his work and 74 to 85 percent trusting him.

But Pulse Asia president Ronald Holmes said the varying results might be due to differences in sampling methods, survey questions and periods when the survey was conducted.

“It’s like conducting an experiment. If you follow the same procedure, you’ll get the same results. If you change the procedure, don’t expect the results [to be] similar,” Holmes said.

But even if the SWS survey was true or even if his approval and trust ratings dropped to zero, Mr. Duterte said he would continue to work because that was what he promised the people.

“If they say I will become unpopular, that’s nothing to me,” he said in a Thursday interview that was aired on Friday.

Only about a third of survey respondents approved of the work of Sereno (33 percent) while 31 percent trusted her, but Sereno’s spokesperson, lawyer Josa Deinla, blamed the impeachment moves against the Chief Justice.

“For the past months, she has been publicly vilified to justify attempts to unseat her on the basis of unfounded allegations, which are not even impeachable offenses,” she added.

Alvarez himself conceded that he had to “work harder” after his ratings plummeted to its lowest level since he became speaker.

Alvarez posted an approval rating of 33 percent in the latest survey, down 10 points from June. His trust rating also declined 10 points to 31 percent.

Pimentel, on the other hand, also suffered a drop in his ratings although a majority of respondents still approved of and trusted him.

Meanwhile, Malacañang welcomed the results of the Pulse Asia survey and urged government workers to draw inspiration from the results.

“We hope these survey results inspire us in the government … We continue to provide a comfortable life for all Filipinos,” presidential spokesperson Ernesto Abella said.

“Despite the multifaceted political noise, President Duterte is still the most approved and the most trusted government official in the Philippines today,” he said. —WITH REPORTS FROM LEILA B. SALAVERRIA, VINCE F. NONATO AND JEROME ANING