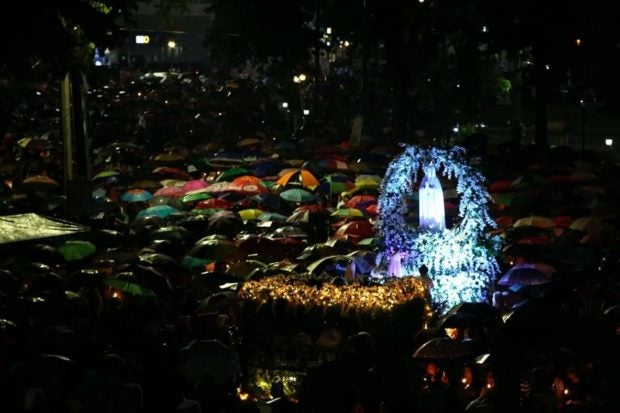 CEBU CITY–A sea of candlelight illumined the length of Osmeña Boulevard in Cebu City where different images of the Blessed Virgin Mary were brought in procession in celebration of the 100th anniversary of the apparitions of Our Lady of Fatima in Portugal.

At least 8,500 people joined the two-kilometer prayer walk from the Capitol building to the Basilica Minore del Sto. Niño in downtown Cebu City despite the drizzle about 9 p.m. on Friday.

Msgr. Ruben Labajo, one of the organizers of the Marian procession, said the candlelight procession was aimed at deepening the devotion to the Blessed Virgin Mary and to pray for various intentions.

“We pray for the forgiveness of sins, salvation of souls, peace in our country, especially in Mindanao, and a greater respect for human life,” he said in an interview.

The rainy and cold weather did not stop the people from walking while praying the rosary and singing hymns in honor of the Blessed Virgin Mary and the Lord.

“Offering sacrifices in atonement for sins was definitely what the message of Our Lady of Fatima conveyed,” said Labajo, the team moderator of the Cebu Metropolitan Cathedral.

At least 14 images of the Virgin Mary from different parishes in Cebu were included in the procession.

Cebu Archbishop Jose Palma presided over the Mass at the outdoor Pilgrim Center of the Basilica del Sto. Niño.

The first apparitions of Our Lady of Fatima were to three Portuguese shepherd children, Lúcia Santos and her cousins Jacinta and Francisco Marto, on May 13, 1917 and they were repeated the following months, the last occurring on October 13 the same year, when a remarkable crowd witnessed the “Miracle of the Sun.”

Senior Supt. Joel Doria, director of the Cebu City Police Office, estimated the number of devotees who joined the prayer walk and Mass at the basilica at 8,500.

At least 170 policemen were deployed along the procession route and at the basilica’s pilgrim center.