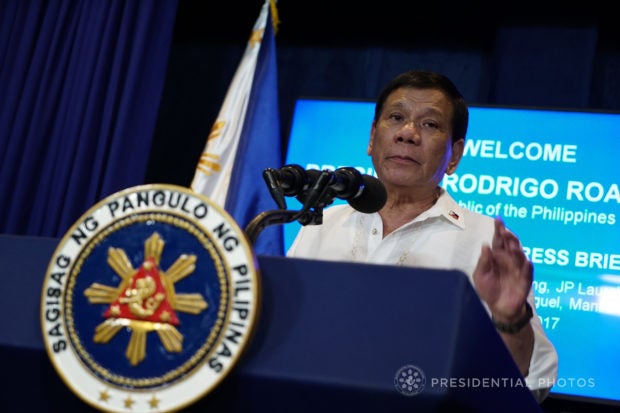 President Duterte warned that he would declare a revolutionary government if his critics’ attempt to destabilize the government escalates and causes trouble.

Mr. Duterte said he does not want to declare martial law because that would require him reporting to Congress. He would rather have a revolutionary government.

Mr. Duterte, who had accused the Reds and the Yellows of conspiring against him, said that he would arrest all the destabilizers once he declares a revolutionary government.

“Pag ang destabilization ninyo patagilid na and medyo magulo na (If your destabilization is worsening and it is becoming chaotic), I will not hesitate to declare a revolutionary government until the end of my term, and I will arrest all of you and we can go to a full scale war against the Reds,” he said in an interview with Erwin Tulfo aired over PTV Friday night.

The interview was taped on Thursday evening.

The President said his move would be just like what former President Corazon Aquino did. Aquino, he said, was about to declare martial law and then changed her mind and instead declared a revolutionary government.

He also said the military knows that the most active group involved in the supposed destabilization attempt is the communist party, which is why it won’t join the efforts.

“Do you think the Armed Forces of the Philippines and the police will sympathize with you after you have cheapened the lives of those who died in the [EJK, EJK]?” he asked.

In August, Mr. Duterte lauded the idea of a revolutionary government over marital law when the intention is to bring about change.

“For me, my advice to a President who wants to change [is] do not go for martial law,” Duterte said in a speech in Malacañang. “They will just make an issue of it. Go for a revolutionary government so that everything will be finished.”

He said Cory Aquino did the same.

“For the Philippines to really go up, I said: What the people need is not martial law. Go for what Cory did – revolutionary government. But don’t look at me. I cannot go there,” he said.