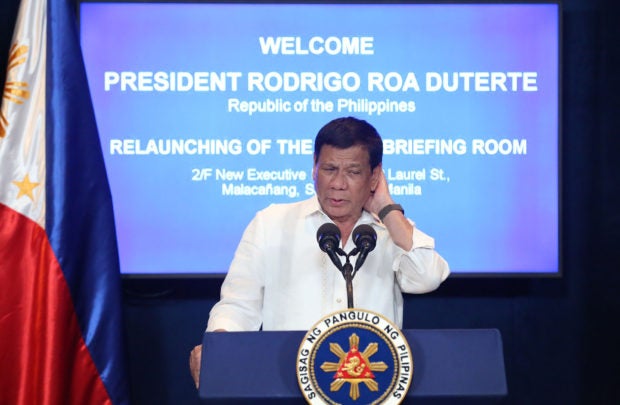 The Alternative Law Groups (ALG) said the President’s tirades and the moves to unseat the two officials are a threat in maintaining the checks and balances in the government.

“We, the Alternative Law Groups (ALG), denounce the brazen assaults against democratic institutions of President Rodrigo Duterte, which undermine the independent bodies mandated by the Constitution to maintain the system of checks and balances in the government,” the group said in a statement.

“These acts deliberately undermine the independence of the institutions whose duties primarily consist in upholding public trust by cleansing the government’s ranks of graft and corruption and maintaining checks and balances so that tyranny would not arise from any branch of the government again,” it added.

Duterte has criticized Sereno and Morales, who have been vocal against his violent campaign against illegal drugs several times and on other different issues.

He had criticized the chief justice for “sitting” on the temporary restraining order against two provisions of the Reproductive Health Law, and the Ombudsman for handing down “selective justice.”

Last week, the same House committee declared that it found “sufficient grounds” to impeach Sereno, even without discussing point-by-point the issues raised against her by lawyer Lorenzo “Larry” Gadon.

Morales, who ordered an investigation into the First family’s alleged unexplained wealth, may also suffer the same fate as Duterte warned her that she may be impeached for “conspiracy” to oust him.

Believing that the attacks and threats to the officials come directly from the President, the ALG urged Duterte to let the due process run its course and allow Sereno and Morales to answer the charges against them in accordance with the law.

“We stand with these institutions not because of the people who are associated with them but because they are the remaining safeguards towards a balanced and just government free from corruption and despotism,” the ALG noted.

The group challenged Duterte to submit himself into investigation about his alleged unexplained wealth.

The ALG also reminded the Congress, which is in charge of the impeachment process, to “hold democracy dear to them,” and “heed the public outcry in bolstering our governmental system of checks and balances.” /jpv