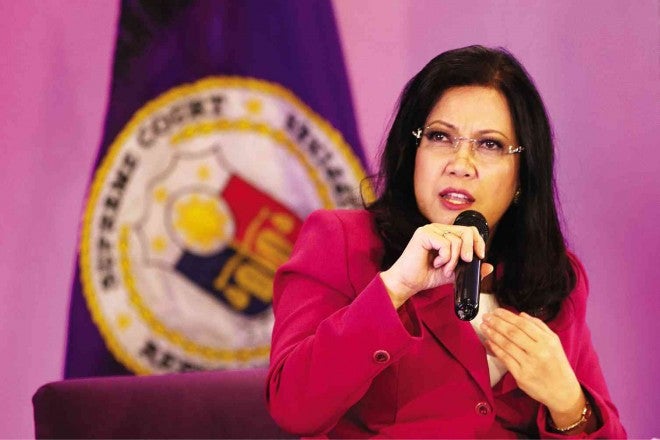 Her trust rating, meanwhile, dipped 12 percentage points from 43 to 31 percent in the same period.

The survey was conducted as an impeachment case against Sereno was filed before the House of Representatives.

The huge descent in her ratings was expected given all the “incessant attacks” against her, the chief justice’s spokesperson, lawyer Josa Deinla said.

“The incessant attacks and vicious smear campaign against Chief Justice Sereno are expected to affect her net satisfaction ratings,” Deinla said in a text message to INQUIRER.net.

“For the past months, she has been publicly vilified to justify attempts to unseat her on the basis of unfounded allegations, which are not even impeachable offenses under the Constitution,” she added.

Last week, the House committee on justice ruled that it found “sufficient grounds” to impeach Sereno, even without discussing point-by-point the issues raised against her by lawyer Lorenzo “Larry” Gadon.

Deinla said that as the country’s top magistrate, Sereno will continue to “fulfill her duties and constitutional mandate regardless of survey results.”

“She remains confident that when all the facts are presented, the allegations being leveled against her–all being falsehoods–will ultimately crumble,” she noted.

The Pulse Asia survey also showed that President Rodrigo Duterte still has the majority of Filipino’s approval and trust: four out of five of the population continue to approve of and trust the chief executive, despite the string of issues of hurled against him. /idl

Read Next
De Lima’s arraignment on ‘weakest’ case deferred anew to Nov. 24
EDITORS' PICK
EDITORIAL: To a bike-friendly future
The Best Tech Gifts For The 2022 Holidays
Is it safe to talk politics again at family gatherings? ‘The Reconciliation Dinner’ shows us what that’s like
House energy committee chair Arroyo bats for cheap electricity
vivo’s coming to town to grant wishes with more holiday promos
Pagasa: Warm, sunny Sunday in most parts of PH
MOST READ
LOOK: Vhong Navarro transferred to BJMP detention facility in Taguig
The Elephant Man in the Senate
Posh village as ‘shabu’ haven
LOOK: Zanjoe Marudo bonds with Ria Atayde, her family
Don't miss out on the latest news and information.