Gunmen kill 6 in a night; PWD fights off shooter 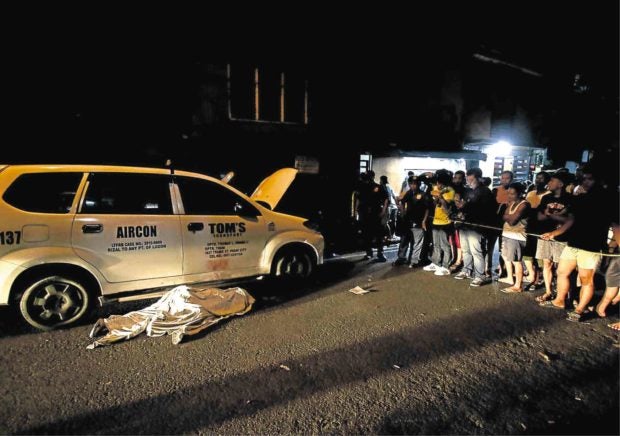 One of the alleged drug users killed by unidentified gunmen along Tramo Street, Pasay City, on Wednesday night. —RICHARD A. REYES

Six people were killed on a single night in different parts of Metro Manila, where one attack saw a person with disability (PWD) showing the rare courage to confront and wrestle with the shooter before losing him in a foot chase.

Motorcycle-riding hitmen found their targets in Manila, Quezon City and Pasay on the eve of the Philippine National Police’s (PNP) announcement that it would now focus on so-called “riding tandem” killers after being stripped of the lead role in President Duterte’s bloody war on drugs.

On Wednesday, President Duterte, whose trust ratings recently showed a decline that critics attribute to controversial PNP drug raids, said the Philippine Drug Enforcement Agency would now be the “sole agency” that would carry out operations against the narcotics trade.

In Tondo, Manila, Barangay 20 chair Arnel “Bong” Parce was shot dead while in a drinking session with friends in front of his house on San Roque Street Wednesday night.

In an incident captured on a security camera, two men on a motorbike stopped next to Parce and his group. The backrider, who wore a mask and a black vest, got off and fired at Parce.

The assailant kept firing even with Parce already down on the ground.

But instead of running for cover like the others, Christopher Balotinos, 32, jumped on the shooter and tried to grab the gun. The shooter managed to keep firing during the scuffle, hitting Balotinos twice near the shoulder, before being pushed to the ground and losing hold of the weapon.

As the shooter ran off to join his cohort, the wounded Balotinos picked up the gun. He tried to shoot the fleeing killer but the gun had no more bullets. He tried to chase him for a few meters but failed to catch up.

Before he disappeared, the gunman had exposed his face to the camera. Balotinos was able to unmask him as they wrestled.

Parce succumbed to his gunshot wounds while being rushed to the hospital.

Balotinos, a deaf-mute who could neither read nor write, had a barangay watchman by his side to serve as an interpreter when the Inquirer saw him on Thursday at the Manila Police District headquarters.

“(Parce) raised me, he took care of me, he provided for my needs, he even gave me money,” Balotinos, who was orphaned as a boy, said. “I want you to know that the chairman was very kind to me.”

In Quezon City, three men were also shot dead while having drinks outside a house at the corner of Premium and Insurance Road Extension in Barangay Sangandaan, around 11:30 p.m. Wednesday.

A report to Chief Supt. Guillermo Eleazar, district director, said a witness recalled seeing five men in an alley leading to the crime scene, one of them armed with a handgun and ordering bystanders to lie face down on the ground as they passed.

The motive for the killing remained under investigation. Supt. Danilo Mendoza, QCPD-Talipapa station commander, said Roxas was on the barangay watchlist of alleged drug users.

In Pasay, two men whom authorities had linked to drugs were gunned down in separate incidents about 10 minutes apart on the same street.

Construction worker Rolando Almogela, 41, was standing on Tramo Street in Barangay 48 at 9:10 p.m. when shot several times. Witnesses said at least six men on three motorcycles were involved in the attack.

Before leaving their victim, the assailants left next to his body a P100 bill and a cardboard sign that read: “Marami pa ang susunod na mamamatay. Umiwas na kayo sa droga. (More will be killed. Stay away from drugs.)”

In a spot report to Senior Supt. Dionisio Bartolome, the city police chief, Almogela’s mother Yolanda admitted that her son used drugs and had served as courier for drug pushers in the area.

Ten minutes later, about 500 meters from the site of the first shooting, 38-year-old pedicab driver Andie Parpan was talking with his friends when killed also by motorcycle-riding gunmen at the corner of Tramo and Eusebio streets in Barangay 43.

A report signed by Bartolome quoted “some people present at the crime scene, who requested anonymity for security reasons,” as saying that Parpan was involved in drug activities.

A police investigator noted that about a dozen bullet casings from a .45-caliber and a 9-mm pistol were recovered from both crime scenes.