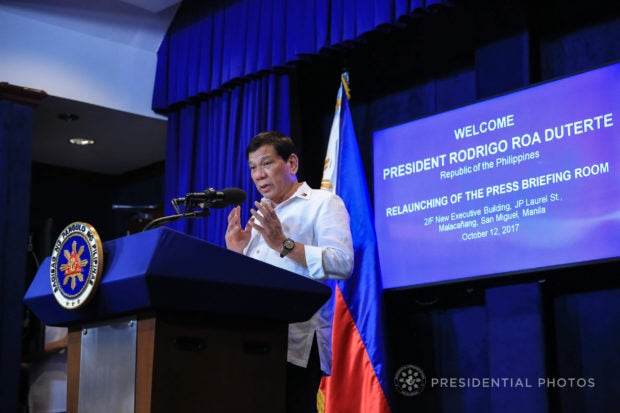 President  Duterte, in his speech during the relaunching of the Malacañang Press Briefing Room (MPBR) at the New Executive Building (NEB) on October 12, 2017, urges the members of the media to remain committed to the truth. ALBERT ALCAIN/PRESIDENTIAL PHOTO

President Rodrigo Duterte on Thursday remained unfazed on the reported destabilization plot against his administration.

Duterte even dared the “Yellow” and the “Red” parties to just merge into one party since they shared the same “ideology,” adding that it would be easier for the government to “focus” on them.

The yellow refers to the political color of the Liberal Party while the Reds refer to the communist rebels.

“To Yellows and Reds, I would be happy really if they will start to merge into one command. Itong mga komunista at itong Liberal. At ito ‘yung ina na gustong paalisin ako. Mag-isa-isa na lang kayo, isang grupo,” Duterte said during his speech at the inauguration of the newly-renovated press briefing room in Malacañang.

“O…think you share the same ideological whatever para hindi na masyadong magkalat ang ano – we can focus on all of you,” he added.

The President earlier accused the Liberal Party and the communist rebels of having an alliance to oust him.