Swimming with sardines in Moalboal 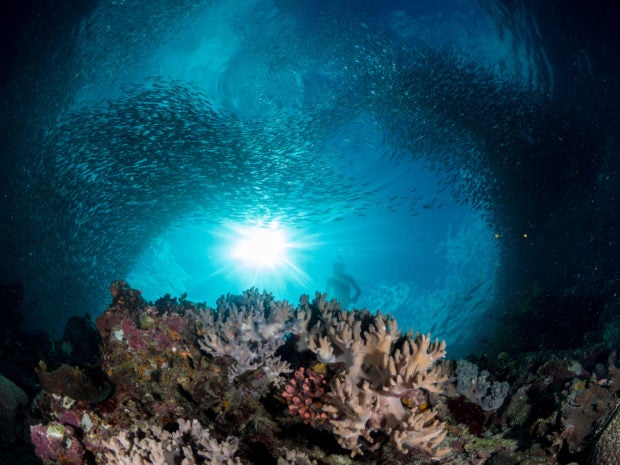 Moalboal’s sardines hover above and around rich reefs and a seawall coated with coral. Photo by Danny Ocampo

Swoosh! Swoosh! Swishing and swarming around us is an endless wave of sardines, moving as one to avoid circling predators like tuna and mackerel.

I’m with underwater photographer Danny Ocampo and we’re diving in Moalboal, known for its “sardine run” – where millions of sardines aggregate just meters from shore.

Beneath us, hungry mackerel swoop down like dive-bombers. In an instant, dozens of hapless sardines are gone. The rest swoosh on and the bubbling free-for-all continues, floating silver scales all that’s remaining of the departed.

When I ask people about sardines, they’re usually equated with 555, Ligo, or for the more nostalgic ones, Rose Bowl (some also equated them with the MRT or LRT). But what do sardines actually look like? Surprisingly, most people don’t know, for when they peel open sardine cans, they get faceless fish swimming in sauce, heads and tails already chopped off.

Sardines are bullet-shaped fish which cruise the world’s oceans in vast schools. In Africa, individual sardine schools are seven kilometers long and nearly two kilometers wide! Forming the building blocks of the marine food chain, they gorge on wafting clouds of zooplankton and are in turn eaten by larger marine predators like mackerel, tuna and sharks. Six major sardine species are commercially-harvested in the Philippines – and except for fish geeks, they all look alike (silver fish with beady eyes).

Though small in size, their economic contribution is anything but tiny. In 2015, the country netted 344,730,201 kilograms of sardines, amounting to P7.43 billion – proving that the industry is one of the country’s major economic drivers. Thousands of Filipinos are employed as fishers, traders or factory workers in the canning, fish drying and bottling sectors, Zamboanga alone employing over 30,000 people.

Though the production trend for sardines seems to be increasing since the year 2000, some local stocks are showing signs of overfishing – like smaller sizes for mature fish and dwindling catch rates for commercial ring-netters. Despite the sheer size of sardine shoals, they aren’t limitless.

Armed with massive nets and tracking gear, commercial fishing vessels with can make short work of sardine schools – even those as large as the ones in Moalboal. Without proper management, they may someday be overfished to the point of extinction. Impossible?

The story of the Passenger Pigeon – once among Earth’s most common birds – is ominous. A single, billions-strong flock flying above Southern Ontario in 1866 was 1.5 kilometers wide and 500 kilometers long. It would have filled the sky from Manila to Ilocos Norte with birds! Sadly, Martha, the world’s last Passenger Pigeon, was laid to rest in 1914, just 48 years later – her kind completely eradicated by commercial hunting.

“Given how important sardines are to our economy, we should ensure that our fisheries are well-managed. We fully support the Bureau of Fisheries and Aquatic Resources (BFAR) in creating a science-based management framework for sardines,” says Oceana Philippines Senior Marine Scientist Jimely Flores.

Over the past five years, closed seasons banning sardine fishing have been implemented in the Visayan Sea, Tañon Strait and Zamboanga, which produces 80% of the country’s output. But sardine reproduction is influenced by many factors. Closed season regulations are just one of many solutions needed.

Global conservation organization Oceana believes that by combining sound science and policies to manage fisheries in just 25 countries, humanity can secure 90% of the world’s wild seafood and feed a billion people every day, forever.

Moalboal and many places in the country still harbor immense shoals of sardines, soaring above and around coral reefs exploding with life. “Now this is the world we envision,” concludes Oceana Philippines Vice-president Atty. Gloria Estenzo-Ramos. “Vibrant oceans teeming with life – able to feed Filipinos and act as bastions for biodiversity.”

Saving the oceans to feed the world

As we near the end of our dive, I take a closer look at the sardines, all of which are nervously trying their best to not be noticed. It’s pretty hard because at first, they all look similar – but soon some pop-out, being larger than others or sporting scars or bite marks.

So these are the sardines we’ve been eating since we were kids – only this time, they’re no longer faceless. Alive, they flit and flirt and reflect the azure iridescence of the sky above. They’re numerous, yes – but individually, they’re very vulnerable.

As Danny signals our ascent, I take a last look at the shoal, still busy as ever. More mackerel swoop in. The slowest and unluckiest sardines disappear.

Unlike in Moalboal where sardines enjoy a degree of protection, many more swim in waters where the real free-for-all happens. Except this time, the mackerel and tuna are commercial boats – hauling whole schools with colossal nets and high-tech fishing gear like sonar and GPS.

When BFAR finally rolls out a sound sardine management plan, these silver fish can breathe easier. But if commercial fishers keep hauling more than what each generation of sardines can replenish, then I can only wonder how long it might be before there’s nothing’s left but silver scales, wafting silent in the blue.

Gregg Yan is an environmentalist and Oceana Philippines’ Director of Communications.

Read Next
Trillanes: I didn’t know Duterte was a ‘murderer’
EDITORS' PICK
ING Pay is the safe and reliable way to pay – here’s why
TECNO Mobile sparks up summer with fun livestreams, great prizes
PGH seeks more plasma donors as it loses 5 patients to COVID-19 daily
House-to-house COVID-19 testing pressed to get ‘true’ PH state
WATCH: INQside Look on the upcoming 2022 polls with Comelec spokesperson James Jimenez
Smart is fastest 5G Network in PH – Ookla
MOST READ
PH military pouring naval, air assets near site of Chinese incursions in WPS
US adds 116 countries to its ‘Do Not Travel’ advisory list
PH-Canada labor agreement coming soon – DOLE
Ganging up on a good thing
Don't miss out on the latest news and information.