Drug war: PNP out, PDEA in 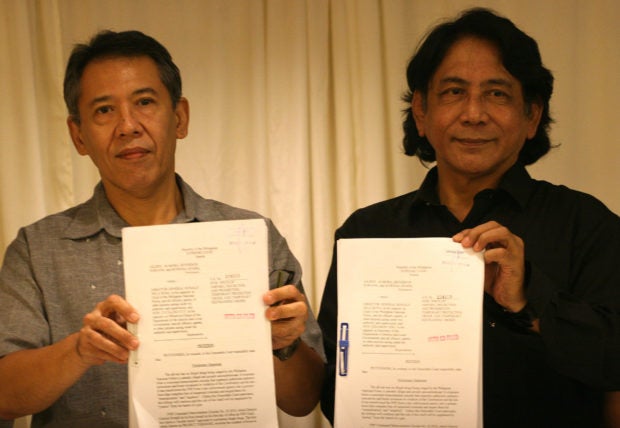 PETITION AGAINST DUTERTE CAMPAIGN Lawyers Jose Manuel Diokno (left) and Felix Mariñas
of the Free Legal Assistance Group are asking the Supreme Court to stop President Duterte’s
antidrug campaign on behalf of a survivor and two people whose relatives were killed by policemen. GRIG C. MONTEGRANDE

President Rodrigo Duterte has taken his war on drugs away from the Philippine National Police and designated instead the Philippine Drug Enforcement Agency (PDEA) as the “sole agency” that will carry out operations against the narcotics trade.

Mr. Duterte’s move is seen as intended to eliminate deadly police raids that have marred his campaign against illegal drugs, which a survivor and two people whose relatives have been killed by police have asked the Supreme Court to stop for being “patently illegal and grossly unconstitutional.”

In a memo he signed on Tuesday, Mr. Duterte ordered the PNP, National Bureau of Investigation, Armed Forces of the Philippines and other agencies to “leave to the PDEA” the conduct of his war on drugs.

Mr. Duterte, however, ordered the PNP to “maintain police visibility as a deterrent to illegal drug activities.”

The President said the change was intended to “bring order” to and make possible “pinpointing precise accountability” in the campaign against illegal drugs.

The shift comes as a blow to the PNP, whose chief has mistaken for peace and order the terror gripping slum communities across the country, with nightly police raids that have left thousands of drug suspects dead since Mr. Duterte launched his bloody campaign after taking office in June last year.

Mr. Duterte issued the order after independent polls showed steep declines in his satisfaction and trust ratings, which chief presidential legal counsel Salvador Panelo on Wednesday blamed on the killing of minors by police carrying out the President’s war on drugs.

One poll also showed most Filipinos were afraid they would end up as victims of summary executions in the campaign.

Police say they have killed more than 3,800 people during drug operations since the launch of the campaign last year.

They insist the victims put up resistance and the officers involved just defended themselves.

More than 2,000 others have been killed by unknown assailants, in what police say could be fights between drug gangs but rights groups believe are attacks by hired guns working for the police or by policemen themselves working for rewards that come with the campaign.

Such attacks have made the war on drugs illegal, according to a group of lawyers that asked the Supreme Court on Wednesday to stop Mr. Duterte’s campaign on behalf of a survivor and two people whose relatives were killed by police.

Assisted by lawyers from the Free Legal Assistance Group (FLAG), the petitioners also asked the Supreme Court to issue a writ of amparo to protect them and their families from harassment and arrest by the police.

They also questioned the legality of a circular issued by the Department of the Interior and Local Government (DILG) allowing citizens to identify people involved in drugs by writing their names on a piece of paper and dropping it into a box found in barangay halls.

The petition for prohibition — brought by Jefferson Soriano, Aileen Almora and Rowena Aparri — is the fourth such legal action that questions Mr. Duterte’s take-no-prisoners strategy in solving the country’s drug problem.

The petition said the war on drugs was an illegal campaign that allowed police to kill and circumvent legal procedures.

The government’s directive for the fierce crackdown permits police to “negate” and “neutralize” targets, effectively granting them a license to kill suspected users and dealers, without gathering evidence or building a case, the petition said.

A practice of compiling lists of drug suspects and encouraging citizens to anonymously provide names was tantamount to drawing up a hit list, it said.

It called for judicial intervention in thousands of cases where suspects were killed by police.

“The present war on drugs being waged by the government is not going to stop illegal drugs, crime and corruption,” FLAG chair Jose Manuel Diokno told a news conference.

“[It] will only result in the killing of more and more people, especially the poor,” he said.

Diokno said one of the petitioners, Soriano, survived after being repeatedly shot by policemen.

Almora lost a brother and Aparri a son in separate police drug raids, he said.

“Our problem with the government’s war on drugs is all about short-cutting the justice system by dispensing justice from the barrels of guns instead of the gavels of judges,” he said. —With a report from the wires