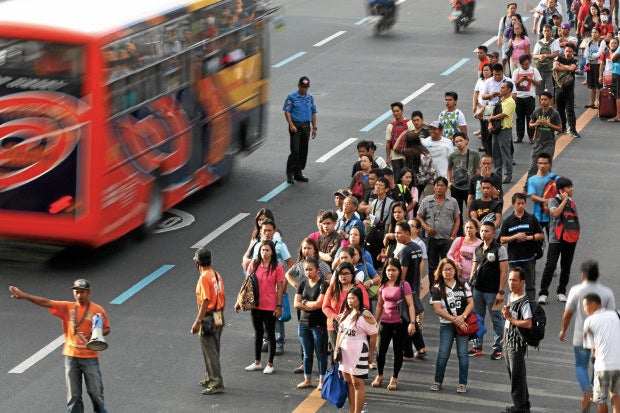 STRANDED Commuters along Commonwealth Avenue in Quezon City share frustration about getting a ride as a transport strike grips many key cities and towns in the country. —FILE PHOTO/NIÑO JESUS ORBETA

The government is all set for the two-day nationwide transport strike geared on October 16 to 17 by progressive transport group Piston, Land Transportation Franchising and Regulatory Board (LTFRB) Board Member Aileen Lizada said on Wednesday.

Lizada said they have reduced the number of buses to be deployed around Metro Manila routes to 20, but as early as 4:00 a.m. on the said dates, government vehicles would be on standby to provide free rides to stranded commuters.

“We’ve discussed with Stop and Go coalition and may proposals sila na gradual modernization and we welcome that. But with Piston(‘s strike), the government is ready but we have minimal buses deployed,” she said.

The upcoming transport strike will be Piston’s third for this year to protest the Department of Transportation’s looming jeepney modernization program, amid the complaint faced by the transport group’s president, George San Mateo.

The LTFRB filed the complaint against San Mateo after they staged a jeepney strike last February which the agency said was a violation of the Public Service Act.

Despite the planned nationwide strike next week, Lizada said they would not be filing any additional charges against San Mateo.