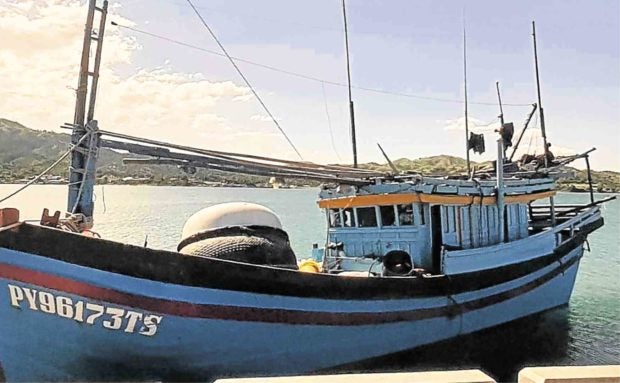 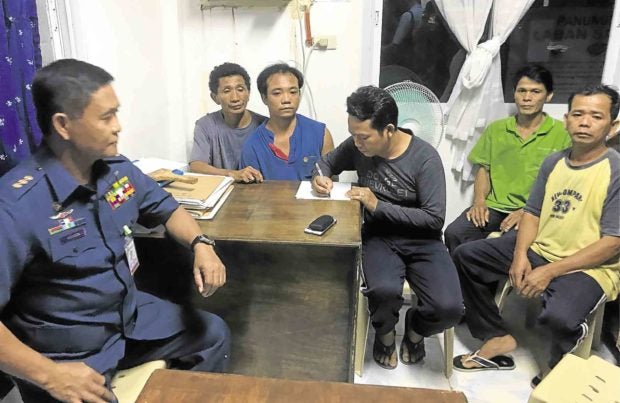 Five of the Vietnamese fishermen apprehended off Bolinao town during their interrogation by the Philippine Coast Guard. They have since been detained in their fishing boat (top photo) docked in Sual town. —CONTRIBUTED PHOTOS

DAGUPAN CITY — Ten Navy men were found liable for the death of two Vietnamese fishermen on Sept. 23 when a Navy ship intercepted the Vietnamese’s fishing boat near waters off Bolinao town in Pangasinan province, according to a multiagency investigative group.

But the provincial committee on illegal entrants (PCIE) did not say what charges it would recommend for two Navy officers and eight enlisted personnel.

They were among 49 Navy personnel aboard the BRP Miguel Malvar that chased and fired at the Vietnamese fishing boat in the West Philippine Sea, 34 nautical miles west of Cape Bolinao.

The committee concluded that the deaths were “an act of unnecessary inadvertence (oversight) on the part of Navy operatives” when the Navy gunner miscalculated and struck Le Van Liem, 41, and Le Van Reo, 41, when the shots, meant to be just a warning, instead hit the bow of the boat.

Liem and Reo, who were hiding in the forward cargo compartment of the boat, were found dead when Navy men boarded the fishing boat.

Lt. Jose Covarrubias, public relations officer of the Naval Forces in Northern Luzon, declined to comment on the committee’s recommendations, saying the Navy had yet to receive a copy of the report.

Senior Supt. Ronald Lee, PCIE chair, said the bodies of Reo and Liem had been returned to their families in Tuy Hoa town in Phu Yen province in Vietnam on Oct. 7.

Lee, who is also Pangasinan police director, said the recommendations arose from a “transparent, impartial and honest-to-goodness” investigation of the case.

“It was a delicate case but it was handled the way it should be handled. All pieces of evidence and persons of interest were accessible,” he said.

He said the PCIE would endorse the investigation report and recommendations to the regional committee on illegal entrants (RCIE).

Last week, RCIE chair, Chief Supt. Charlo Collado, said charges had been filed against the erring Navy men but he did not give details of the complaints.

PCIE had recommended the filing of poaching complaints against the Vietnamese boat captain, Pham To, and his crew, Phan Lam, Nguyen Thanh Chi, Phan Van Liem and Nguyen Van Trong, who were detained at their fishing boat docked at a wharf in Sual town.

The Vietnamese fishermen were caught in the Philippines’ exclusive economic zone. —Gabriel Cardinoza