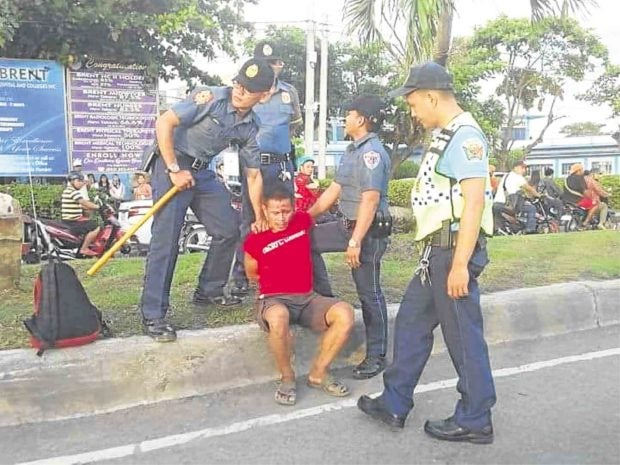 The last time Eduardo Serino Sr. was seen alive was with these policemen accosting him on RT Lim Boulevard on Sept. 30. Eduardo would be dead, technically in police custody, about two hours after this photo was taken. —CONTRIBUTED PHOTO

ZAMBOANGA CITY — The Commission on Human Rights (CHR) in Western Mindanao has started investigating the death of a man while in police custody on Sept. 30.

Lawyer Frederick Ian Capin, CHR regional director, said that the investigation started after CHR officials saw photos of Eduardo Serino Sr., in his 40s, bloodied and being held by policemen.

The photos went viral on social media when they were shared in a post by Rosherl Lumpapac, who employs Eduardo’s wife as a domestic help and knows the victim’s family personally.

Lumpapac told the Inquirer that she knew the couple to be “kindhearted, hardworking and very respectful people.”

“I felt bad about the way cops treated manong (Eduardo). This man has never been violent,” Lumpapac said.

Eduardo, a farmer from Sibuco, Zamboanga del Norte, was in the city to deliver money for his 11-year-old son’s hospital bill.

Lumpapac said that on Sept. 30, Eduardo was probably on his way back to Sibuco when he got lost looking for the bus terminal and ended up at RT Lim Boulevard.

Lumpapac said that at RT Lim Boulevard, policemen checked him and demanded that he open his backpack. Eduardo refused, leading to his beating.

He was brought to a police station on Old Mercado Street. Two hours after, police brought a lifeless Eduardo to Zamboanga City Medical Center, Lumpapac added.

Supt. Neri Ignacio, acting city police chief, denied that Serino had been killed by police. He said there should be an “impartial and independent” probe.

Journalists following up the case were pointed by police to inmates who claimed they saw Eduardo hurting himself in jail.

Capin, the CHR regional chief, said it was not likely for anyone already arrested to “hurt himself.” “He is already in fear,” he said.

Senior Insp. Edwin Duco, spokersperson for the city police, said in a Facebook post that Eduardo was accosted around 6 p.m. on Sept. 30 when he refused to open his backpack for inspection while he was in an enclosed area for the Hermosa Festival on RT Lim Boulevard.
Duco claimed that Eduardo wrestled with policemen and broke free from his handcuffs.

At the police station, Duco said, Eduardo started to hurt himself, which would explain the bruises on his body.
Duco refused to show the police blotter report on Eduardo’s arrest, citing “guidelines from Camp Crame.”
Duco said Eduardo died harming himself. He, however, said police did not have Eduardo’s medical certificate because Zamboanga City Medical Center refused to release the document.