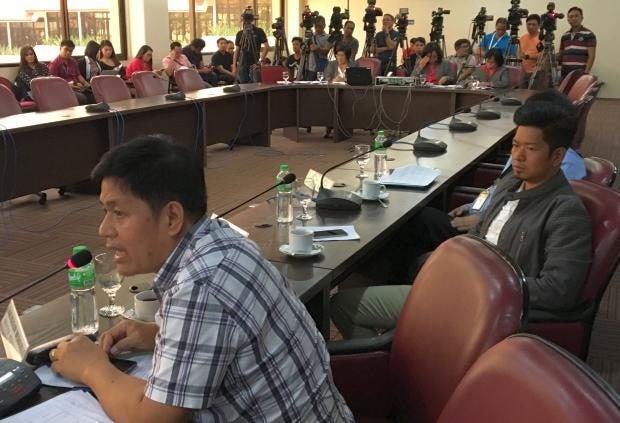 National Housing Authority Regional Director Rizaldy Mediavillo explains why the agency did not disclose right away that the steel bars used in a Yolanda resettlement project was undersized. Contractor Juanito Tayag of J.C. Tayag Builders, Inc., looks on during a joint inquiry by the House of Representatives on Tuesday, Oct. 10, 2017. (Photo by VINCE F. NONATO / Philippine Daily Inquirer)

The National Housing Authority is set to terminate the contract of a construction firm that allegedly used substandard materials in the houses meant for the resettlement of families in Eastern Samar that were displaced by Typhoon Yolanda (internationally known as Haiyan) in 2013.

A notice to terminate and a show-cause order was issued to J.C. Tayag Builders, Inc., back in August, NHA Visayas Management Office officer-in-charge Grace Guevarra said on Tuesday during the joint inquiry of the House of Representatives’ housing and good government committees on Tuesday.

NHA Assistant General Manager Froilan Kampitan added that the affected projects in Eastern Samar could still be completed even though the houses were built using 8-mm steel rods instead of the 16-mm specification.

“We just need to rebid it to a new contractor,” he said.

No payment, no acceptance

Kampitan also stressed that “no payment has been made, no acceptance of the project has been done,” amid the issues hounding J.C. Tayag’s resettlement projects.

But, J.C. Tayag owner Juanito Tayag maintained during the hearing that he did not know that undersized bars were used in the construction.

Tayag already testified under oath in a Sept. 18 hearing that substandard materials were not used in the housing projects. But a subsequent inspection uncovered the use of undersized rods, prompting housing committee chair Rep. Albee Benitez to say on Sept. 26 that he planned to file perjury charges against Tayag.

The contractor, however, stuck to his claim during the Tuesday hearing and said that “based on our records, we did not use 8-mm [steel rods].”

He even raised the possibility of an inside job.

“In truth, even we are investigating it because we do not know why there were 8-mm. We really did not buy and use 8-mm,” he said.

The lawmakers also grilled NHA Region 8 Director Rizaldy Mediavillo for not earlier disclosing to the House that the issue with the materials was already flagged in a “site memorandum” as early as December 2016.

Mediavillo told legislators that the site memorandum required the contractor to rectify the errors. Otherwise, they would not be paid.

But, Benitez questioned why the attention of the House was not called sooner and said no one would have noticed if the committee had not conducted a hearing and if J.C. Tayag subcontractor Camilo Salazar had not come forward as a whistleblower.

“I find it unusual that suddenly, there’s a site memo that you released in December 2016,” Benitez said. “You yourself don’t even know. Doesn’t it show the NHA’s shortcomings in the management of the project?”

“That site memo was very material and important [to this issue],” he said. “They’re using substandard material. In all construction, I haven’t seen anyone use 8-mm.”

Mediavillo explained, however, that such site memoranda were circulated among the on-site engineers and not the level of the regional office.

Kampitan defended the NHA regional office and conceded: “Maybe the issue really is the time response.”

Still, Benitez said: “There seems to be failure on the NHA’s monitoring system.”

Meanwhile, good government committee chair Rep. Johnny Pimentel questioned why J.C. Tayag was engaged as a contractor for the P800-million project, when its previous project in San Jose del Monte in Bulacan was only worth P96 million.

He also questioned why the contract had not been rescinded when it had incurred slippages – that is, failure to meet the deadline – in the range of minus-70 percent.

“You do not enter into a contract with unqualified contractors”, he said. “No wonder the Yolanda emergency housing program is very much delayed.” /atm