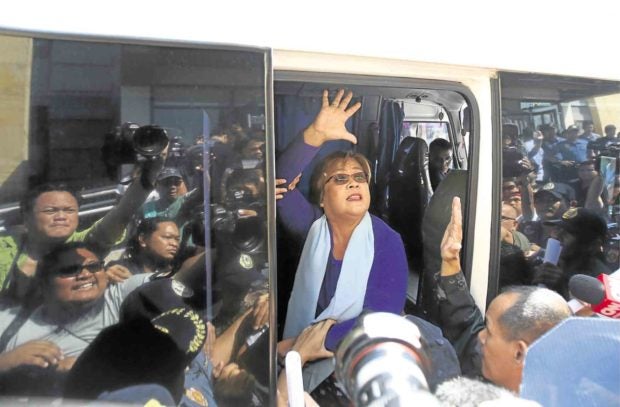 Sen. Leila de Lima urged the National Bureau of Investigation (NBI) on Saturday to investigate the man allegedly behind the peddling of fake offshore bank accounts of her and Sen. Antonio Trillanes IV.

“I call on the NBI to thoroughly investigate this ‘Snooky’ Cruz and his activities, and upon confirmation of his swindling ways, to refer the matter to the National Prosecution Service, for appropriate action,” De Lima said in a statement.

“Fake bank accounts, fake info, and yes fake, perjured witnesses in a grand conspiracy of lies. It’s indeed a reign of fools, liars and demons. And this regime is now working double time towards consolidation of power… That I clearly see,” she added.

READ: US Intel linking her to drugs? De Lima says it’s out of this world

“From Sen. Trillanes’s privilege speech, it appears that “Snooky” professes (or more appropriately, misrepresents) himself to be well-connected to the U.S. Embassy, a former federal agent kuno,” she said.

“Most likely, it’s this guy also, a typical operator, who peddled the concocted story about the US intel confirming my purported connections to the illegal drug trade,” she added.

Trillanes earlier described Cruz as a “swindler” and a self-proclaimed “financial forensic expert” who allegedly had an access to all bank accounts in the world.

“Based on our informant, Mr. Cruz sold this information. He also did this before, or last year for that matter, when he offered and sold this supposed fake bank accounts by Sen. Leila de Lima, and see the difference,” Trillanes said in his privilege speech on Tuesday. /jpv